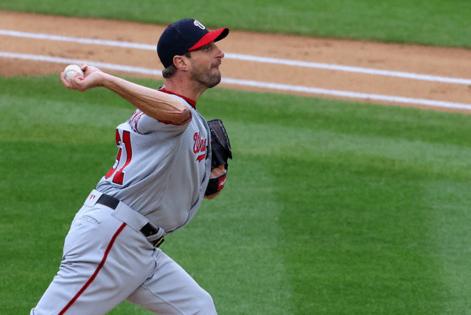 SAN DIEGO — The Padres may be on the verge of getting a future Hall of Famer to help their beleaguered starting rotation.

One source confirmed the sides are working toward a trade for Scherzer but would not say it was done nor provide further details. Another source said other teams remain in on Scherzer and the Padres are working on multiple other trades for pitchers. A third source called the report “premature.”

As of late Thursday morning, the Padres were continuing their talks with the Minnesota Twins regarding right-hander Jose Berrios.

The Padres spent part of the week trying to work a deal that would have sent first baseman Eric Hosmer and prospect Robert Hassell III to the Texas Rangers for Joey Gallo. Instead, Gallo went to the New York Yankees.

If the Scherzer trade goes through and Hosmer is not involved, the Padres would have kept their clubhouse leader and added a pitcher with a reputation for being as dominant a presence as he is on the mound.

Scherzer, who turned 37 on Tuesday, has won three Cy Young awards and had four other top-five finishes.

He allowed one run in six innings in getting the win against the Philadelphia Phillies on Thursday, improving to 8-4 this season with a 2.76 ERA.

Scherzer is in the final season of a seven-year, $210 million contract and will be a free agent after this season. The Padres were not initially in the market for a rental, but their situation changed as the expected uptick in performance from their starting pitchers has not occurred.

Yu Darvish, Blake Snell and Joe Musgrove were acquired to be the mainstays in what was projected to be among the major leagues’ best rotations. Snell has a 5.44 ERA and has gone six innings in just three starts. Musgrove threw the franchise’s first no-hitter in April and has made eight quality starts, but he has a 6.24 ERA over his past five starts entering Thursday’s outing against the Rockies. Darvish has been among the league leaders in many categories much of the season but has totaled just 13 2/3 innings and allowed 12 runs in his past three starts.

Wednesday’s four-inning outing by Snell was the Padres’ 47th start that did not last even five innings. That is most, by far, of any contending team.

The team entered July thinking big-picture — that their championship window is just opening — and that it would not part with any top prospects and would not trade for players not under team control for at least an additional year. But having made an offseason splash with the trades for the three pitchers and the signing of shortstop Fernando Tatis Jr. to a record contract but still facing the prospect of playing a win-or-go-home Wild Card playoff game, the thinking of Padres Chairman Peter Seidler, one source said, is “in for a penny, in for a pound.” As in, they are too close to not go all the way now.

ANAHEIM, Calif. — Not only did the Seattle Mariners see their season-high six-game winning streak come to an end Saturday night, they also dropped one game further back in the American League wild-card standings after an...Read More

Lance Lynn paused for a moment while warming up for the bottom of the fifth inning Saturday at Progressive Field.

The Chicago White Sox starter received a visit from the training staff after experiencing a “tweak in his...Read More

MINNEAPOLIS — Saturday was always going to be a bullpen day for the Twins, with John Gant making his return to the mound after a trip there because of a lower abdominal strain. Gant lasted three innings before manager ...Read More

DENVER — A San Francisco Giants team led by a left-handed hitting slugger is setting records and charging toward the postseason.

PHOENIX — It was set up to be a night of reaching milestones and making up, or at the very least maintaining, valuable ground in the National League West standings.

Instead, the Los Angeles Dodgers suffered a dismal ...Read More

In a year when no one is running away with the NL East title, and the team that does clinch the division won’t even rack up 90 wins, Steve Cohen’s Mets collapsed when it mattered and tumbled out of contention.