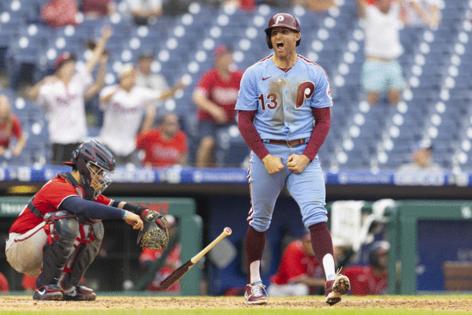 PHILADELPHIA — For the better part of two games Thursday, the Phillies bumbled and stumbled and looked nothing like the NL East title contender that the players and management purport to be.

But the last thing they did before Friday’s 4 p.m. trade deadline was gather at home plate to pile on Brad Miller after his walkoff grand slam punctuated a split-salvaging 11-8 victory in a doubleheader against the Washington Nationals at Citizens Bank Park.

The Phillies dropped the first game, 3-1, after Max Scherzer shut them down for six innings in what likely was his final start for the Nationals and Zack Wheeler gave up a two-run homer to Yan Gomes in the seventh. Then, a half-hour after the first game ended, they fell behind 4-0 in the first inning of the second game, spot-starting rookie Cristopher Sanchez getting KO’d after recording only one out.

By the third inning, the Phillies trailed 7-0. They also lost Bryce Harper to back spasms and Rhys Hoskins to a tweaked left groin. The everything-must-go Nationals appeared to be on their way to a sweep, even as their front office was having discussions about trading Scherzer.

But the Phillies rallied to tie it. Down to their last strike in the seven-inning game, J.T. Realmuto lined a two-run single through the left side to make it 7-7 and send the game to extra innings.

After the Nationals drove in their ghost runner in the eighth, the Phillies loaded the bases, with Aaron Nola, of all people, drawing a walk. Up stepped Miller to clock a grand slam.

The Phillies finished the day where they end most days: at .500. They are 51-51, the 21st time in 102 games that their record has been even. But they are also only 3 1/2 games behind the division-leading New York Mets and haven’t made the playoffs since 2011.

Now, president of baseball operations Dave Dombrowski must decide by 4 p.m. whether to go for it -- and how aggressive to be about improving the roster.

ANAHEIM, Calif. — Not only did the Seattle Mariners see their season-high six-game winning streak come to an end Saturday night, they also dropped one game further back in the American League wild-card standings after an...Read More

Lance Lynn paused for a moment while warming up for the bottom of the fifth inning Saturday at Progressive Field.

The Chicago White Sox starter received a visit from the training staff after experiencing a “tweak in his...Read More

MINNEAPOLIS — Saturday was always going to be a bullpen day for the Twins, with John Gant making his return to the mound after a trip there because of a lower abdominal strain. Gant lasted three innings before manager ...Read More

DENVER — A San Francisco Giants team led by a left-handed hitting slugger is setting records and charging toward the postseason.

PHOENIX — It was set up to be a night of reaching milestones and making up, or at the very least maintaining, valuable ground in the National League West standings.

Instead, the Los Angeles Dodgers suffered a dismal ...Read More

In a year when no one is running away with the NL East title, and the team that does clinch the division won’t even rack up 90 wins, Steve Cohen’s Mets collapsed when it mattered and tumbled out of contention.