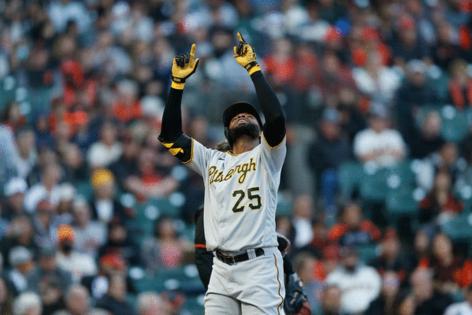 SAN FRANCISCO — It started with the Pittsburgh Pirates loading the bases in the first inning and ended with San Francisco Giants outfielder Mike Tauchman tossing sub-70-mph fastballs in his first career pitching appearance.

One pitch into the Giants’ game Saturday against the Pirates, Kevin Gausman was already in a hole. By the time reliever John Brebbia was jogging in from the bullpen in the with one out in the fifth, the Pirates had tagged Gausman for four runs and would add two more by inning’s end.

With a second subpar outing since the All-Star break, Gausman’s ERA climbed above 2.00 for the first time since the beginning of May. The Giants dropped their second straight contest to the Pirates, 10-2, and will look to avoid a sweep at the start of a nine-game homestand in Sunday’s series finale.

“He just didn’t have enough control of his split,” manager Gabe Kapler said. “I don’t think he has his usual control or command right now.”

Pirates leadoff hitter Adam Frazier slapped the first pitch he saw into center field, then Gausman issued back-to-back bases on balls, including a stretch of seven straight pitches outside the strike zone. Eventually he coerced a ground ball for an inning-ending double play to keep the damage at a single run. The tone for the night, however, was set.

The Pirates plated two more in the third inning and rallied for three runs in the fifth — all credited to Gausman, who allowed six runs, all earned, on eight hits and four walks over 4 1/3 innings. He recorded two strikeouts, the fewest of any start this season.

Pirates starter Will Crowe, who entered the game with a 6.12 ERA, limited the Giants to two runs over 5 1/3 innings. For the second straight night, an opposing starter matched his career high in strikeouts against the Giants; Crowe finished with nine, after Chad Kuhl recorded eight Friday night.

Lamonte Wade Jr. provided a little offense in the sixth inning with 10th home run of the season, which he sent over the right-field wall on a 3-2 fastball from Crowe. The Giants are one away from tying their franchise mark of nine players with double-digit home runs after Alex Dickerson joined the club Friday and Wade on Saturday.

The Giants had to trade two outs for their only other run of the night. Wilmer Flores singled to lead off the second inning and came around to score on a double-play ball off the bat of Thairo Estrada.

On Monday, in his first start after the All-Star break, Gausman needed 80 pitches to complete three innings in an eventual win over the Dodgers. On Saturday, he used 89 pitches to labor through 13 outs. Combined, he has allowed eight runs over 7 1/3 innings since the break.

Gausman’s regression means that Juan Marichal (1.57, 1965) is still the last Giants pitcher to take a sub-2.00 ERA at least 20 starts into a season. Gausman strung together 16 straight outings allowing four runs or less, but that streak came to an end Friday. Only Christy Mathewson (18) had more consecutive starts with three or fewer runs in franchise history.

The two teams this season to plate more than three against Gausman? The Pirates and Cincinnati Reds.

First baseman Brandon Belt was running the bases on the field pregame. It’s the final step before Belt begins a rehab assignment, according to Kapler. Belt hasn’t played since June 23 with a right knee injury. “This last little step is what he needs to feel comfortable,” Kapler said. “It’s running the bases and seeing how he comes back the next day.”

Buster Posey batted third and played catcher. What’s newsworthy about that? It was only the third time this season Posey was penciled in the starting lineup for a third consecutive game. Posey’s workload has been carefully controlled, but Kapler and Posey have said to expect him to play more down the stretch.