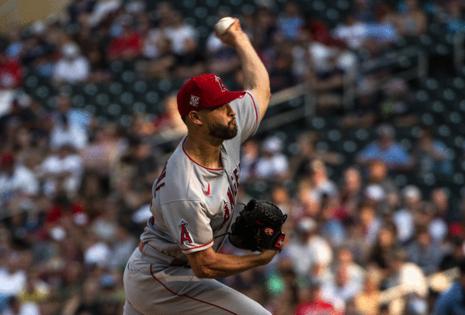 MINNEAPOLIS — Brent Rooker, batting .083 and without a major league hit since April 26, sliced a line drive down the first-base line with one out in the ninth inning on Saturday, a double that spoiled Patrick Sandoval's attempt to become the first pitcher ever to throw a no-hitter against the Twins in Minnesota.

And the bid at history — only five pitchers in 61 seasons, two of them Angels, have no-hit the Twins — nearly wound up as a loss. After Max Kepler flew out, Josh Donaldson laced a double into the left-field corner, scoring Rooker and putting the tying runner on second base. But after Angels closer Raisel Iglesias replaced Sandoval, Miguel Sano swung through a full-count change-up, his third strikeout of the night, to give the Angels a 2-1 victory.

Sandoval walked a batter, hit a couple more and watched Sano reach base on a throwing error — but he also struck out 13, at least one Twin in all nine innings, and departed having allowed only one hit in 8 2/3 innings.

Sandoval, a third-year left-hander acquired by the Angels three years ago Monday for a backup catcher, had little trouble dominating a withered Twins lineup that includes nobody hitting above .265. Using a mix of pitches that sliders, change-ups, curveballs and only brief glimpses of a 92-mph fastball, Sandoval induced 18 swings-and-misses and allowed only one relatively hard-hit ball — Sano's fifth-inning grounder to short that Jose Iglesias fielded but threw away. Sandoval followed Sano's grounder by whiffing five of the next six hitters he faced.

Sandoval's attempt at history overshadowed Jose Berrios' final start before the trade deadline. Berrios pitched seven strong innings, allowing a pair of unearned runs in the first inning but little else. Berrios didn't allow a hit after the second inning, retiring 15 in a row at one point.