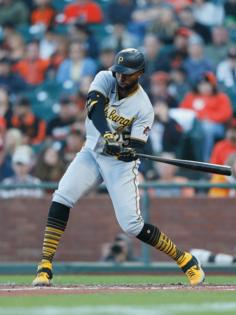 SAN FRANCISCO — Gone were the Los Angeles Dodgers, the heated rivalry and National League West implications. But what the San Francisco Giants apparently couldn’t leave in Los Angeles was a little drama.

The Giants trailed again entering their final at-bat but couldn’t snatch a third straight victory from the grasp of Pittsburgh closer Richard Rodriguez like they had Kenley Jansen of the Dodgers the past two nights. Lamonte Wade tripled home Darin Ruf to pull the Giants within two runs with an out to go, but Rodriguez eventually shut the door on the 6-4 loss.

“What’s frustrating is I don’t think we played our best game from any angle,” manager Gabe Kapler said. “It’s hard to win a baseball game when you’re not at your best in all three components of the game.”

San Francisco tied the game at 3 in bottom of the sixth on one swing of Alex Dickerson’s bat but gave the lead right back the next inning. Dominic Leone struggled to find the strike zone, and Pittsburgh rallied for three runs and the decisive advantage.

Leone walked three of the first four Pirates in the seventh inning and allowed all five batters he faced to reach base. With a ground ball to first, the Giants appeared to find their way out of the inning down by only a run, but Wade bobbled the ball as he transferred from his mitt to his throwing hand and two more Pirates were allowed to score.

There was no shortage of heart-pounding pitches Friday night, but was there any lack of urgency against the club with the fourth-worst record in baseball?

“I don’t think there’s any risk of us not taking this game especially seriously,” manager Gabe Kapler said before the game. “The last few days were incredibly intense, and we all had a lot of fun. But right when that game ends, we have to turn the page and do so immediately. … That started pretty shortly after last night’s game.”

Dickerson turned on a hanging slider from Pirates starter Chad Kuhl to tie the game at 3. His home run sailed off the top of the tall right-field wall, scoring Buster Posey, who reached on his second opposite-field double of the game.

Kuhl had primarily used that slider to quiet the Giants through five innings.

The Giants’ first eight outs all came via strikeout, and Kuhl had matched his career-high by the end of the third inning.

The only run the Giants could muster through five frames came on a solo shot off the bat of Steve Duggar that splashed down into McCovey Cove. The dinger was Duggar’s first since June 16 and his first RBI in 12 games.

Kapler came out to check on Duggar a couple pitches before, after he showed some discomfort around his ribs. Duggar informed Kapler he felt fine, then proved it two pitches later.

Dickerson’s home run was his 10th this season and made him the seventh player on the roster with double-digit dingers, one closer to the franchise record of nine. (Three others Giants have nine home runs, and San Francisco leads the majors with 146 this season.)

Giants starter Johnny Cueto needed 65 pitches to make it through three innings and was lifted for a pinch-hitter in the bottom of the fifth. Cueto, who owns the lowest ERA against the Pirates of any pitcher in the live-ball era with at least 200 career innings against them, allowed three runs on three hits over five innings while striking out seven.

Bryan Reynolds, whom the Giants traded to Pittsburgh as part of the Andrew McCutchen trade in 2018, put a hanging slider from Cueto over the right-center field wall to give the Pirates a 3-0 lead in the third inning, his 17th long ball of the season.

Cueto also reached on a walk in the third inning and hustled into second a few pitches later for the first stolen base of his career. It was the first time a Giants pitcher had swiped a bag since Kirk Reuter in 2003, according to NBC Sports Bay Area.

SAN DIEGO — It didn't take long for Camilo Doval to bottom out.

The 24-year-old rookie was eight games into his major league career when he walked off the mound at Coors Field hanging his head. Doval entered a May 4 ...Read More

And the team accomplished its first goal Thursday, clinching the American League Central title for the first time since 2008 with a 7-2 victory in ...Read More