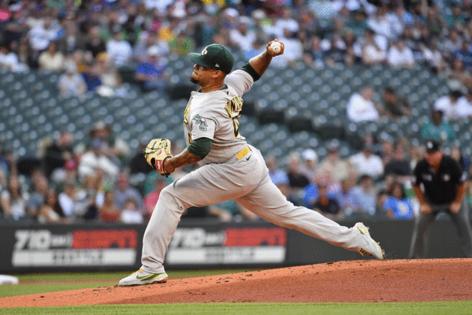 SEATTLE — The Seattle Mariners had to find a way.

They couldn’t spoil the performance from Yusei Kikuchi.

They couldn’t lose a second straight game to the Oakland A’s to start the all-important four-game series.

They needed to find a way to score a run that wasn’t off a homer.

Enter Dylan Moore and his combination of speed, aggressiveness and generally annoyingness while on the bases to provide the go-ahead run and the eventual 4-3 victory over the A’s.

With tough lefty Jake Diekman on the mound, Moore was called on to pinch-hit for the lefty swinging Jake Bauers with two outs in the seventh inning. He hit a soft groundball to the right side of the infield, beating out an awkward throw from second baseman Tony Kemp for an infield single. He immediately stole second base with ease to move into scoring position, leaving Diekman visibly upset.

That irritation perhaps led to pair of wayward pitches in the dirt that got past catcher Sean Murphy, allowing Moore to advance to third and then score the go-ahead run.

Kikuchi re-found his dominance with the help of a revamped pitch previously used for only certain occasions — the changeup.

He pitched six innings, allowing three runs on six hits with a walk and a career-high 12 strikeouts. Kikuchi is just the fourth lefty starter in Mariners history to strike out 12 or more batters in a game.

With his fastball touching 97 mph, but generally ranging from 93-95 mph, Kikuchi had the velocity and life that was missing from his previous two starts. He offset that with the changeup he learned from former Mariner Hisashi Iwakuma that features a split-finger fastball grip. Kikuchi threw it like a splitfinger with a nasty sinking motion and he threw it often — a total of 29 times. It generated 12 swings and misses, including nine with two strikes for strikeouts.

The Mariners grabbed a 3-0 lead against the A’s and big right-hander Frankie Montas in the second inning.

The two-run blast had a 113 mph exit velocity and traveled 444 feet per MLB Statcast.

Luis Torrens followed Raleigh with a solo homer of his own. It wasn’t quite the prodigious blast like Raleigh’s majestic shot. The right-handed hitting Torrens stayed on a slider, sending it just over the wall in right field for his 12th homer of the season.

It would be the only three runs allowed for Montas. He struck out the next three batters to end the second inning and then retired 12 of the next 14 hitters he faced from the third through the seventh inning. He finished with four hits allowed, a walk and 10 strikeouts.

Kikuchi was far from perfect. He left pitches over the middle to Matt Chapman in the third inning and Matt Olson in the fourth inning. Both resulted in solo homers right-center field.

Oakland tied the game in the fifth inning when Seattle’s defense broke down. Ty France failed to turn what appeared to be a certain inning-ending double play on Jacob Wilson’s one-out groundball. With two outs, Mark Canha ripped a double into the left-field corner. With two outs, the A’s gambled and tried to score Wilson from first on the play. He should’ve been out. But Raleigh couldn’t catch J.P. Crawford’s one-hop relay throw that reached home before Wilson even started sliding.