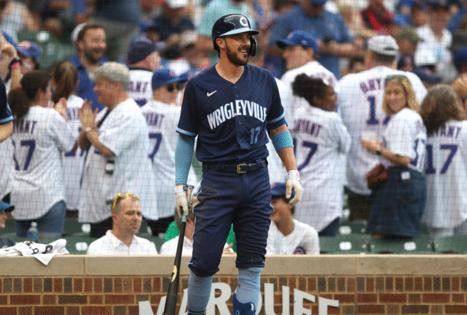 CHICAGO — After the Chicago Cubs selected him with the No. 2 pick in the 2013 draft, Kris Bryant was asked if he knew anything about the organization.

“I know they haven’t won a World Series in a while, so hopefully I can do all I can to help the Cubs win one,” he replied. “I know it’s a great baseball city, a great team and a lot of history to it. I’m excited.”

Bryant helped deliver the first Cubs championship in most of their fans’ lifetimes, turning in an MVP season in 2016 and making the final play of the epic Game 7 victory in the World Series. That year forever altered expectations on the North Side while contributing to the increased revenue streams that made the team a cash machine for the Ricketts family.

Bryant, Javier Báez and Anthony Rizzo on Friday began the final homestand before the July 30 trade deadline in a state of flux, waiting to learn whether they’ll be dealt to a contender so the Cubs can start rebuilding for their next window of opportunity.

It was fitting then, in the first inning of Friday’s 8-3 win over the Arizona Diamondbacks, that the Big 3 celebrated together at home plate after Báez’s three-run home run into the left-field bleachers at Wrigley Field.

The only thing missing was a selfie to mark the occasion.

It’s hard not to be nostalgic this week after Cubs President Jed Hoyer’s “eye on the future” declaration July 8 that fueled the rumor mill. Even if the Cubs wanted to pretend it was just another day at the ballpark, some fans would not let them.

On a sweltering afternoon with 34,059 in the park, a few dozen fans sitting in the same section as Chairman Tom Ricketts decided to let him know what they thought about the possibility of Bryant no longer wearing a Cubs uniform.

They all donned Bryant jerseys and gave him a standing ovation when he strolled to the plate in the first inning.

Cubs fan Kevin Thompson said he bought about 40 Bryant jerseys to hand out to people in the section to “send a message” to Ricketts to keep Bryant. It probably would’ve been cheaper to write it down, walk over to Ricketts and hand it to him, but money was no object.

OAKLAND, Calif. — Back in mid-January, almost a month before they even reported to Arizona for 2021 spring training, Marco Gonzales and J.P. Crawford held steadfast to their beliefs even as those around them and above ...Read More

MILWAUKEE — Unable to generate much offensively against Milwaukee other than a single here or a walk there, the Cardinals’ increasingly resourceful lineup had to conjure another way to find enough runs and extend one ...Read More

PHILADELPHIA — In a duel of two of baseball’s worst bullpens, the better came away victorious.

With the Orioles and Philadelphia Phillies both planning to use their bullpens to cover every inning Tuesday at Citizens ...Read More

CHICAGO — Nick Gordon discovered the joys and frustrations of playing at Wrigley Field on Tuesday night.

The versatile Twins utility player drilled a home run into the famous bleachers, a two-run shot that restored the ...Read More

NEW YORK — Every swing of the bat matters for the Yankees, who are chasing down a berth in the postseason. Three big swings by the Yankees defined Tuesday's 7-1 victory, the 85th of the season by the team and their ...Read More