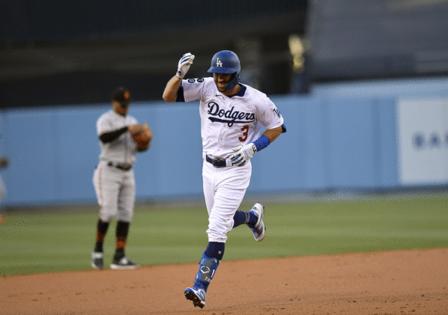 LOS ANGELES — For the last 52 days, a Giants team that enjoyed an unlikely first half run of excellence has sat alone in first place in the National League West.

Thanks to Buster Posey, Wilmer Flores and closer Tyler Rogers, they’ve made it 53 in stunning fashion.

A night after the Giants coughed up a 6-1 fifth inning lead and lost 8-6 on a walk-off three-run home run from Dodgers catcher Will Smith, it was San Francisco’s turn to break hearts as Flores launched a go-ahead two-run home run off closer Kenley Jansen to power the Giants to a come-from-behind 4-2 win.

With the Giants trailing 2-1 entering the ninth, Posey came off the bench for his fourth pinch-hit appearance of the season. The catcher drilled a Jansen cutter into right field to start a Giants rally before Steven Duggar replaced him as a pinch-runner.

Duggar didn’t have to do more than jog.

On the third pitch of Flores’ at-bat, he crushed a 406-foot homer into the left field bleachers to stun a Dodgers crowd that was sent into a frenzy only 24 hours earlier when Smith crushed a Rogers slider deep into the night.

With Rogers warming in the bullpen, a Giants’ offense that has struggled to manufacture runs of late rallied for one more as a Darin Ruf double followed by walks from Donovan Solano and Thairo Estrada convinced Dodgers manager Dave Roberts to pull Jansen.

Immediately after Rogers surrendered the walk-off home run on Tuesday, Giants manager Gabe Kapler affirmed his confidence in the right-hander and said he “couldn’t wait,” for the next opportunity to send him back to the mound.

Rogers got one heck of a chance at redemption.

ST. LOUIS — After their ghastly ninth-inning loss to the Chicago Cubs on Tuesday night, the Cardinals needed a proven stopper, even if the losing streak was just one game. On their team, who better than soon-to-be-40-...Read More