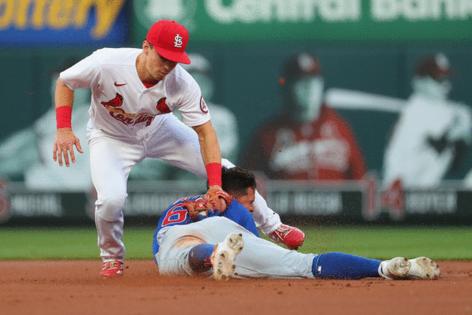 ST. LOUIS — After their ghastly ninth-inning loss to the Chicago Cubs on Tuesday night, the Cardinals needed a proven stopper, even if the losing streak was just one game. On their team, who better than soon-to-be-40-year-old Adam Wainwright, who was 85-45 in his career after a Cardinals loss, ghastly or otherwise.

Wainwright gave the Cardinals just what they wanted — seven innings of one-run ball as he became their third consecutive starter not to issue an unintentional walk in the first three games of this series.

But a bullpen without Alex Reyes, who was held out after throwing 30 pitches in the loss the night before, allowed the Cubs to tie the game in the ninth. Then, after lefthander T.J. McFarland had pitched out a jam in the top of the 10th with the help of a dazzling play started by shortstop Edmundo Sosa, the Cardinals won the game 3-2 in the bottom of the 10th on Yadier Molina’s one-out single to right off Craig Kimbrel, scoring Paul Goldschmidt, who had begun the inning as the runner at second.

Bader, throwing out his fifth multi-hit game in his past seven, doubled for his third hit of the night to score Paul DeJong with the tying run in the seventh and, moments later, came home with the go-ahead run on Dylan Carlson’s double as the Cardinals rallied for a 2-1 win which manager Mike Shildt watched from somewhere in the clubhouse. Shildt had been ejected for protesting a strike three on Carlson in the latter’s previous at-bat.

With the Cardinals down 1-0 in the seventh, DeJong reached first on a tapper in front of the plate. He reached second when catcher Willson Contreras threw wildly at first.

Tommy Edman failed to advance DeJong by popping up a bunt. But Bader plugged the gap in left center and the game was tied. Pinch hitter Matt Carpenter flied out but Carlson doubled over the head of Ian Happ in left and the Cardinal had the lead.

Genesis Cabrera moved to the eighth inning and Giovanny Gallegos recorded the final out of the eighth but hit his second batter in the ninth and the Cubs tied the score on pinch Eric Sogard’s pinch hit double.

With the Cubs starting the 10th with Rizzo on second, Gant allowed a single to Javy Baez, with Rizzo stopping at third. Lefthander T.J. McFarland relieved to throw a double-play ball on which there were five throws. Sosa gloved Ian Happ’s grounder and stepped on the bag for the forceout.