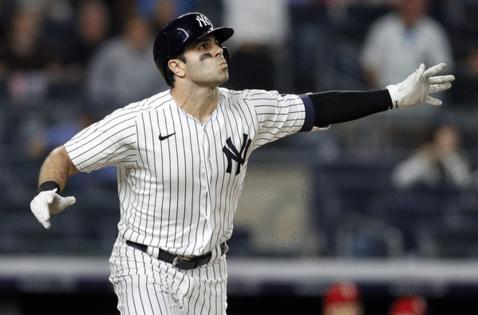 NEW YORK — Ryan LaMarre’s pinch-hit, walk-off single scored Gary Sanchez in the 10th inning as the Yankees survived a battle of the bullpens with the Phillies and earned a 6-5 win on Wednesday night at Yankee Stadium.

It was the fourth straight win for the Yankees (50-44), who swept the two game series against the Phillies (47-47), who had swept them at Citizens Bank Park last month. The Bombers have won their last four series, including the last two without Aaron Judge and Gio Urshela, who are two of the six players on the COVID-19 injured list.

Gleyber Torres hit his sixth home run of the season, his third in four games. The Yankees shortstop had three in the first 90 games of the season. Rougned Odor hit his second in the last three nights and 11th of the season, a two-run shot in the seventh.

Greg Allen, called up when Judge went on the COVID-19 IL, continued to provide a spark for the Yankees with a game-tying RBI double in the fourth. Estevan Florial beat out a grounder to third, stole second and scored from there on Giancarlo Stanton’s single up the middle in the seventh. Odor drove in Stanton with his homer to cap the Bombers’ beating of the Phillies struggling bullpen.

The Yankees bullpen basically had to piece together five innings Wednesday night and had just one hiccup.

[More Yankees] Red light that appeared in batter’s eye at Yankee Stadium during series against Red Sox still a mystery to teams, MLB »

Pitching on back-to-back days for the first time this season, Zack Britton struggled. The lefty reliever, who had come in with a three-run lead, walked two and left with one out and the bases loaded. Nick Nelson gave up a two-run single past a diving Tyler Wade at third to score Luke Williams. Britton then walked Jean Segura to reload the bases. He got a huge strikeout of Phillies slugger J.T. Realmuto then threw a wild pitch that allowed the Phillies to score the game-tying run.

The Yankees’ decision to start Asher Wojciechowski on Wednesday once again amplifies their need for starting pitching depth. That is something that the Yankees will have to weigh here in the final eight days until the trade deadline.

Wojciechowski got off to a rough start, having his first pitch of the night sent out of the ballpark by Jean Segura. He settled in and gave the Yankees four innings allowing two runs on three hits. He walked three and struck out four.

LOS ANGELES — Two years after the city of Anaheim agreed to sell the property surrounding Angel Stadium to a company led by Angels owner Arte Moreno, the city could be forced to put that deal on hold and put the land on ...Read More

PHOENIX — This was supposed to be a series where the Pirates could gain some traction, especially coming off a weekend where they won two of three against the Mets. Facing the worst-in-baseball Diamondbacks, the only ...Read More