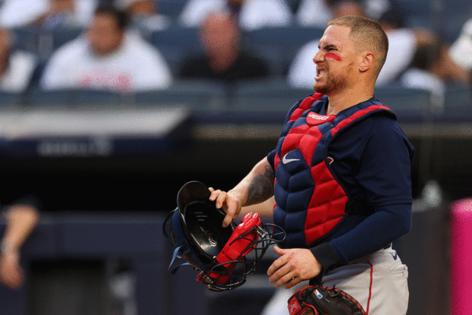 It is still a mystery. After a red light appeared at least three times in the batter’s eye at Yankee Stadium during the Bombers’ win over the Red Sox Sunday night, MLB contacted the team to try to identify what happened. The league “looked into it thoroughly,” and “found no evidence of rules violations by either club,” a league source told the Daily News. Therefore the league considers this incident closed, the source said.

The Yankees had their Stadium operations personnel reviewed numerous in-stadium security cameras to find the source. They were not able to definitively discover the source, but after reviewing the tapes believe it was one or possibly more fans with a cell phone. They believe the red light came from an app.

There was no clear video of the lights, which appeared in the windows in center field as Red Sox manager Alex Cora described it. Cora, who coincidentally served a one-year suspension because of his involvement with the Astros’ sign-stealing scandal, said Sunday night it was no big deal.

But it was weird.

The game was delayed momentarily in the seventh inning, when Boston catcher Christian Vazquez popped up out of his crouch during a DJ LeMahieu at-bat and told home plate umpire Manny Gonzalez he saw something.

Umpires talked to the grounds crew and stadium security was out above the batter’s eye before the end of the inning. This obviously would raise a catcher’s concern considering the sensitivity to in-stadium signals after the Astros’ scandal.

And the league and the Yankees wanted to figure out what happened.

Yankees manager Aaron Boone said Sunday night that his catcher Gary Sanchez saw it when he was behind the plate as well.

“They said there was a red light that flashed, that was my understanding, that a red light flashed when the pitch went,” Boone said. “Right away Gary said something to us like it happened when he was behind the plate too. So I don’t know what it was or where it came from. I’m sure we’ll try and get an explanation.”

The national ESPN broadcast showed a still shot of a light that seemed to be coming from a cell phone two levels above the actual batter’s eye.

If Matt Harvey had pitched as well as he has thus far in the second half of the season, he might not have been around to make Friday night’s start for the Orioles in Detroit.

Instead, the veteran right-hander’s ...Read More

ST. PETERSBURG — The Rays and Red Sox are going to see plenty of each other over the next six weeks as they battle for the American League East, playing 13 times.

The Rays got the key stretch off to a good start Friday ...Read More

NEW YORK — Some elements were in place for the Mets to enjoy their final Friday of July. They acquired savvy shortstop Javier Baez from the Cubs at the trade deadline. Their retro black jerseys returned for the first ...Read More

The Toronto Blue Jays on Friday night played their first game in their home ballpark in 670 days after the coronavirus pandemic forced them to play home ...Read More

PITTSBURGH — Friday’s trade of Richard Rodriguez to the Atlanta Braves left the Pirates without a clear-cut closer in their bullpen. Maybe it’ll eventually be David Bednar, maybe someone else. Whoever gets the job, ...Read More

Brian Cashman looked at the Yankees a month ago and admitted the team he built stunk. They have slouched around .500 for most of the year and even now are not considered in the mix for the American League East race. The ...Read More