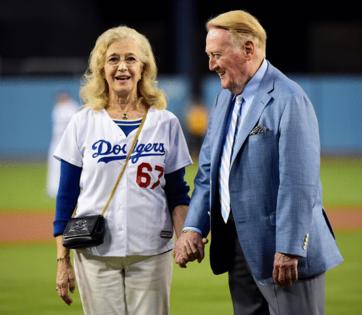 Vin Scully was so sharp, one could easily envision him stepping right back into the broadcast booth.

He was also so muted, one could feel his pain.

In some of his first public comments since the Jan. 3 death of his beloved wife, Sandi, Scully answered my recent phone call with both resignation and hope.

"I'm OK, I really am," he said. "I've been severely wounded, but I've also come to grips with it. I believe it's all God's plans. I'm just trying to do the best that I can for as long as I have."

What ensued was a 30-minute conversation that revealed the human side of a Los Angeles sports deity, the city's most trusted voice lowering his tone to share the anguish of his loss, the path toward his recovery, and the wisdom gained on the journey.

He was speaking from his home, where the 93-year-old icon spends virtually all his time these days with constant visits from his three daughters and the 24-hour presence of a nurse.

"I'm able to get out, but in all honesty, for whatever, 100 different reasons, I guess, I'm just more content being in the house, far from the maddening crowd, I guess you could say," he said. "I find a great deal of peace just being at home."

He was also speaking from his heart, which was indelibly broken when his wife of 47 years died of complications from ALS.