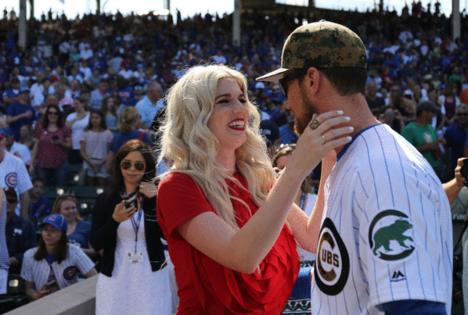 Ben Zobrist’s estranged wife, Julianna Zobrist, says the former Chicago Cubs utility man was “guilty of failing to preserve marital assets” when he took a leave of absence from the team in May 2019, so she will ask a judge to award her an additional $4 million when those assets are divided during next month’s divorce trial, according to pretrial documents obtained by the Chicago Tribune.

“In 2019, he had a contract with the Chicago Cubs for ($12 million), but since he only played for 2 months, his salary was prorated and he only earned ($4.5 million) of the ($12 million) he could have earned,” according to the memorandum filed July 14 in Williamson County, Tenn., by Julianna Zobrist’s attorney, Marlene Eskind Moses of Nashville, Tenn.-based MTR Family Law.

The brief contends that Ben Zobrist “intentionally and voluntarily stopped working” and “essentially went from the top of his game to basically giving up, which caused a massive loss in income.”

Julianna Zobrist is seeking an even split of the marital assets, plus an additional $4 million for the “amount of money he failed to preserve by abruptly and intentionally failing to satisfy his baseball contract.”

Ben Zobrist’s attorney, Helen S. Rogers of Nashville-based Rogers, Shea and Spanos, calls the claim and its reasoning “utterly absurd” in a filing to Judge Michael W. Binkley and shifts blame to the extramarital affair Julianna admitted to having with the couple’s former pastor and marriage counselor, Byron Yawn.

Zobrist is suing Yawn for $6 million in a separate case in Davidson County for intentional infliction of emotional distress and defrauding his charity.

“Rather than accepting blame for having torn her husband’s heart out by having an affair with their pastor, she expected him to be able to totally focus in an elite athletic job that required (100%) of his physical and mental energy,” Rogers writes in the memorandum. “It is Mrs. Zobrist, by having the extramarital affair and confessing same to her husband, and not disclosing the true extent of her affair, that caused him such extreme mental distress and difficulty that resulted in an inability to finish his long and very successful career in the way that he had hoped for and planned for.”

Ben Zobrist alleges that Julianna overspent from the marital estate by “at least $691,602.86” and is seeking 60% of the couple’s assets.

Both parties laid out their full battery of accusations in the briefs as well as their proposals for dividing assets and sharing custody of their three young children. Here are just some of the facts and allegations revealed in documents before the weeklong divorce trial is set to begin Aug. 9 in Franklin, Tenn.

— Ben Zobrist’s witness list includes Yawn and his now ex-wife, Robin Yawn; Zobrist’s agent, Scott Pucino; his trainer, Josh Costello; and an “Erin Dillard.” The wife of Zobrist’s longtime friend and former Milwaukee Brewers reliever Tim Dillard is named Erin. It appears some if not the majority of witness testimony will come from depositions.