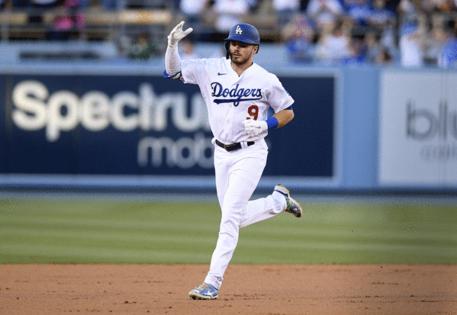 LOS ANGELES — On a night of all-you-can-eat offense, Clayton Kershaw produced two singles and an RBI on Friday for the Los Angeles Dodgers.

He pitched pretty well too, surrendering only three hits and an unearned run in a 12-1 Dodgers victory over the Texas Rangers.

The game didn’t feel even that close as the home team pounded Rangers pitching early. The Dodgers established a season high with five home runs — by the end of the fourth inning.

As one-sided as the score was, the developments weren’t all great for the Dodgers.

Max Muncy was removed before the top of the second for what the team said was right-side tightness.

The Dodgers also lost Cody Bellinger for the night in the fifth after he reached on an RBI single. It was announced that he had tightness in his left hamstring.

Kershaw’s dominant night — he finished with nine strikeouts in six innings — came with a new catcher, Will Smith.

Austin Barnes, who had caught each of Kershaw’s first 13 starts, was held out as he works his way back from an ankle injury. Barnes started Thursday in Pittsburgh and is expected to be back in the lineup Sunday.

Kershaw retired the first six Rangers hitters and then pitched around a Culberson double leading off the third by striking out three in a row.