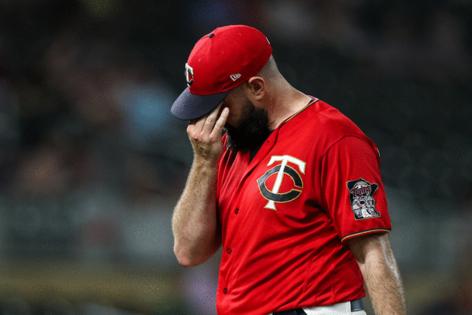 MINNEAPOLIS — Nelson Cruz had no trouble picking up right where he left off at the plate.

The Twins designated hitter hit a walk-off home run Thursday night to salvage one game against the team's American League nemesis New York Yankees. And in his first at-bat of Friday's series opener against the Houston Astros at Target Field, he repeated himself.

Albeit with a bit more practice, as it took him seven pitches to send the ball into the bullpen. He needed just one Thursday.

That started a series of three solo home runs through the first three innings for the Twins, but they needed more, losing 6-4 to Houston. The Twins were hoping to harness Thursday's dramatic (and rare) victory into a turnaround in front of an announced crowd of 17,223 at Target Field, as the team was 25-37 and last in the American League Central heading into the game.

"Anytime you have a night like that, it's great. It's fun. It carries over inside after the game," manager Rocco Baldelli said of Thursday's big finish spinning into Friday. "And I think everyone goes home and wakes up the following day in a very good place."

Miguel Sano took Cruz's lead and hit a leadoff homer in the second inning. Josh Donaldson, who homered to tie Thursday's game in the bottom of the ninth before Cruz won it, also homered in the third inning Friday.

Alex Kirilloff was close to adding a fourth home run in the sixth inning, but Houston center fielder Myles Straw jumped at the wall to prevent his team from falling behind again.

The Astros scored their first run in the third inning, putting two runners on base from Martin Maldonado's single and Michael Brantley's double. Alex Bregman then hit a sacrifice fly to bring Maldonado home and cut the Twins' lead to 2-1.

Jose Altuve had struck out in his first two plate appearances but homered in the fifth to again cut the Twins' lead in half. When Jorge Alcala relieved Twins starter Bailey Ober to start the sixth inning, he gave up a leadoff homer to the bullpen from Yuli Gurriel to tie the score at 3.

In the seventh, Tyler Duffey pitched the Twins into trouble. He appeared to lose control, throwing several pitches in the dirt. He walked Altuve and hit Brantley with a pitch. He allowed them both to advance into scoring position off a wild pitch.

Shortstop Andrelton Simmons helped Duffey out, cutting off Bergman's ground ball to throw him out at first, but Altuve still scored to garner Houston's first lead.

Matt Shoemaker made his first bullpen appearance for the Twins in the eighth after Baldelli demoted him from the starting rotation. In his first relief appearance since 2014, Shoemaker pitched a perfect eighth, but he gave up two runs on three hits in the ninth.

Donaldson hit his second solo home run of the game into the right-field stands in the eighth. The Twins had only two other hits: Gilberto Celestino's first career double in the fifth and Kirilloff's ground ball single in the eighth.