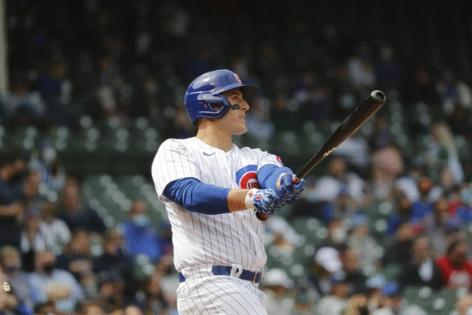 CHICAGO — As Wrigley Field opened up Friday to 100% capacity for the first time since September 2019, the Chicago Cubs were answering questions about players who chose not to get the COVID-19 vaccine.

The Cubs are one of only eight MLB teams not to have reached the 85% threshold for fully vaccinated tier-one personnel. First baseman Anthony Rizzo told WMVP-AM 1000 host David Kaplan on Friday that he decided not to get vaccinated, becoming the first Cubs player to admit it publicly.

Rizzo, who quickly became a trending topic on Twitter, was unavailable for comment before Friday’s game against the St. Louis Cardinals. A cancer survivor, Rizzo did not give a reason for his decision.

“Ultimately you have the individual choices of 100 people when you factor in tier-one and tier-two (personnel),” he said Friday in an on-field interview with the Chicago media. “There are a lot of individual choices that going into (a decision). I wish those individuals choices led to us being 85 percent (fully vaccinated).

“They haven’t. But commenting on any one person, I don’t feel comfortable doing it.”

Manager David Ross said in San Diego he hoped fans would not judge players’ decisions after a fan yelled “get vaxxed” to one player during a recent Cubs game in San Francisco. But Rizzo already was being criticized on the internet for not getting the vaccine.

Hoyer said he hoped fans wouldn’t treat Cubs players who were not vaccinated any differently than before.

“I don’t think that’s a positive,” Hoyer said. “Our players, especially guys that have been here for a long time, have built up an incredible equity in the community with the fans. And making a personal choice, and one they’re probably not going to articulate to the fans, it’d be a shame if the fans decided to take all that equity and get rid of it.”

Shortstop Javier Báez, who publicly has promoted getting vaccinated, defended Rizzo for being honest in the interview.