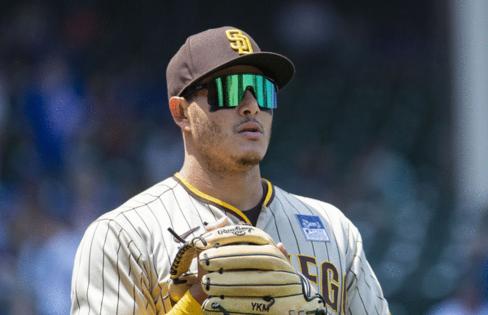 The thrown bat that nearly hit A’s third baseman Alberto Callaspo in 2014. The high slide on Dustin Pedroia of the Red Sox in 2017. Tangling feet with Brewers first baseman Jesus Aguilar in the 2018 postseason. The Shakespearean moments of “run or not to run, that is the question.”

Here’s the thing, though: Today’s Machado in almost no way resembles that Machado, if someone truly takes the time to look. Self-absorbed? Self-centered? Selfish? The portrait now feels as out of step in these times as baseball’s unwritten rules.

“When he’s struggling, not hitting like he can hit, he’s in here positively affecting the dugout and showing it’s bigger than him,” said Padres infield guru Bobby Dickerson, who has known Machado since Single-A ball.

“He’s not sulking, he’s not moping around. He’s like, you know what, my teammates will pick me up. It speaks tons for his character.”

In the second game of the most recent series against the Cubs, Machado flung his arm around Ha-seong Kim on the dugout rail like old buddies after a few beers.

When newcomer Brian O’Grady hit his first homer with the Padres and first in two seasons, the veteran rushed to hang the gaudy “Swagg Chain” around his neck.

It’s not easy to shake the edgy, bombastic narratives about Machado. He fueled enough of them on his own. Is baseball ready, though, to acknowledge a maturing star penning the next chapter?

The third baseman has become the leader the Padres crave, the leader they need, especially with a sputtering offense heading into a road series against the Mets.

Machado, by all accounts, has grown into something bigger and more, those around him vow. Nearing 29, the maturity is catching up to the singular skills. And gasp, he hustles.

SAN DIEGO — The Padres and the County of San Diego will hold two free walk-up vaccine clinics at Petco Park, with the first one scheduled for Saturday and the second on June 26. A free pair of Padres tickets will be ...Read More

Kansas City Royals pitcher Brad Keller couldn’t stop the slide. The right-hander kept his club within striking distance up until the sixth inning, but the Los Angeles Angels got to him in that inning and the Royals ...Read More