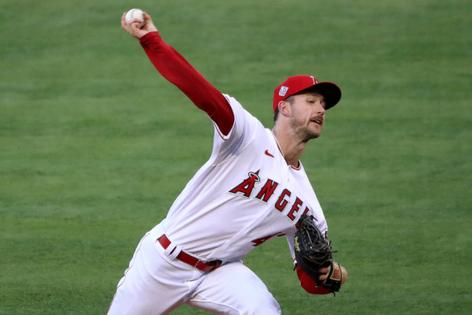 Kansas City Royals pitcher Brad Keller couldn’t stop the slide. The right-hander kept his club within striking distance up until the sixth inning, but the Los Angeles Angels got to him in that inning and the Royals offense never got going.

For the second night in a row, the Royals offense scratched out only one run as they fell to the Angels 6-1 in front of an announced 10,474 at Angels Stadium on Wednesday night.

The Angels completed a three-game series sweep and outscored the Royals 22-5.

The Royals (29-31) have now lost five in a row. They’ll continue their West Coast road trip with four games in Oakland starting on Thursday night.

Keller (6-5) allowed five runs on eight hits and four walks in 5 1/3 innings. He also struck out four. Two of the four walks came around to score.

The Angels (30-32) scored three runs against Keller in the sixth inning to give themselves breathing room in what had been a one-run game.

After giving up 16 earned runs in his first four starts (12 innings), Keller showed encouraging signs of progress in his next eight starts. He allowed 18 earned runs in those eight starts (43 2/3 innings). Prior to Wednesday, he hadn’t allowed more than three runs in any of his past six starts.

Keller entered the night having won four consecutive decisions. The Royals had won each of his previous five starts.

The Padres homered a lot and then walked away with their first series sweep of the Dodgers in more than eight years.

A bases-loaded walk by Trent Grisham in the eighth inning was the deciding run in a 5-3 victory over the...Read More

NEW YORK — A duo of Triple-A pitchers, one rookie and one familiar longman reliever, were the latest to step up and help carry the Mets to a series split against Atlanta. The Mets offense, a unit that finally broke out ...Read More

BALTIMORE — When the Orioles returned from their latest winless road trip, the thought of being home surely provided at least some comfort.

They had won five games in their previous homestand, as many as they had won ...Read More

ST. PETERSBURG, Fla. — The Rays needed something, anything, to break what they felt was a spell of bad things happening to a good team during a losing streak that spanned seven games and eight days.

The catcher made a tremendous block on a potential wild pitch as the Bombers’ closer was imploding in the top of the ninth against ...Read More