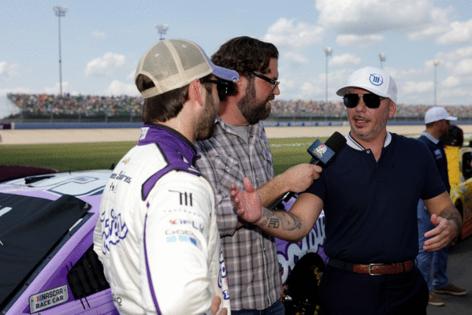 In addition to the No. 99 Chevrolet driven by Daniel Suárez and the No. 1 Chevrolet driven by Ross Chastain, Trackhouse will add the No. 91 Chevrolet to its lineup to enter at least one race during the 2022 Cup season with plans to expand the program in the future. The car will be driven by “renowned international racing drivers,” according to a team release.

The organization, co-owned by Justin Marks and international music icon Pitbull, is in its second season and already has two wins with the No. 1 team. With its PROJECT91 entry, Trackhouse is aiming to “become the destination for global superstars from other racing disciplines eager to compete in America’s most popular form of motorsports,” the team said.

“PROJECT91’s mission is to activate the intersection point of NASCAR racing and global motorsport culture,” Marks said in a statement. “I truly believe the (Next Gen) car represents an opportunity for NASCAR to enter the global professional motorsport conversation. We now have a race vehicle with international technological relevance where world-class drivers from other disciplines can compete at NASCAR’s highest level without the steep learning curve that the previous generation cars required.”

Marks has frequently talked about how the Next Gen car, NASCAR’s latest iteration of race car that differs vastly from prior generations from a mechanical and production standpoint, inspired his move to team ownership. Trackhouse ran its first season with Suárez, a native of Mexico, as the sole driver in 2021 and added the No. 1 car driven by Chastain for a full season this year. Marks has previously said that his desire was to further expand Trackhouse, with the latest move reflecting that desire as well as the aim to enhance NASCAR’s global reach.

The driver lineup for PROJECT91 is not yet known. The team said it will announce its first driver and race in the coming days.

CHARLOTTE, N.C. — Sheletta Brundidge was trying to enjoy a family vacation. The mother of four had packed up their Camping World RV for spring break in early March for the 18-hour trip from their Minnesota home to her ...Read More

If you don’t believe me, consider that Miami Dolphins ...Read More