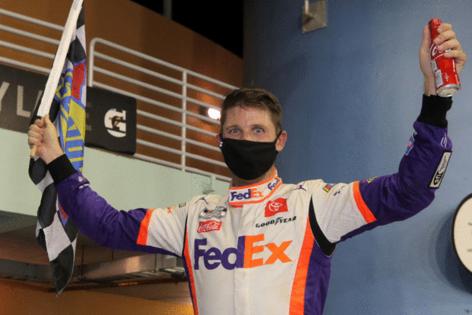 Hamlin is one of four contenders to win the Cup Series title Sunday in the 312-lap championship race at Phoenix Raceway. Though he grew up in Virginia and lives in North Carolina, Tampa is where his parents met and he was born.

That would be enough to add him to the list of recent Tampa Bay champions, along with the Bucs (Super Bowl 55), Lightning (back-to-back Stanley Cups), Rays (back-to-back AL East crowns) and Rowdies (who won the Eastern Conference last year).

More importantly for Hamlin, driving his No. 11 Joe Gibbs Racing Toyota to a championship Sunday would check off one of the only missing pieces on his Hall of Fame resume. The 40-year-old is one of only six drivers to win at least three Daytona 500s. His 46 career victories — two more than Bill Elliott and three fewer than Tony Stewart — are tied with Buck Baker for 17th all time. Kyle Busch (59) and Kevin Harvick (58) are the only active drivers with more race wins.

The difference between Hamlin and the others: Hamlin has not yet won a series title.

Hamlin finished second in 2010. In the current playoff format — a one-race showdown with three other contenders — Hamlin has been a finalist in 2014, ‘19 and ‘20 but came up short each time.

If you’re looking for a reason why his 16th full-time season might end differently, consider the location. Hamlin has more wins (two) at Phoenix than any of the other finalists. His average finishing position (10.8) is the highest there, too.

Hamlin has not dominated this season the way fellow finalist Kyle Larson did. Larson won a career-high nine races to Hamlin’s two. But Hamlin had almost as many top-five finishes (18) as Larson (19) and earned his way to the final round, where he’ll also compete against teammate Martin Truex Jr. and defending champion Chase Elliott.

After years of successful seasons that ended without championships, Hamlin might be due to break through and shed his reputation as one of NASCAR’s best drivers without a series title.

“I think he’s at peace with it,” Gibbs told reporters Tuesday. “But also, you just know he has a burning desire and is going to give it everything he’s got on Sunday.”

And if Hamlin can finally earn that long-awaited title, he’ll add another championship trophy to Champa Bay’s collection.

CHARLOTTE, N.C. — Members of the 2021 NASCAR Hall of Fame class anticipated their induction for more than a year, but the wait didn’t make Friday night’s ceremony any less special. It only elevated the moment.

ATLANTA — Sitting in the No. 85 stock car on a cold, windy day at Atlanta Motor Speedway, my senses are popping like the pistons and valves in the 358-cubic inch engine.

I can smell carbon, like at my dad's machine shop...Read More

Brandon Brown posted a statement on social media Thursday evening with the intention to “clear the air on some things” regarding a controversial sponsor rollout for the 2022 NASCAR season.

Brown is the driver at the ...Read More