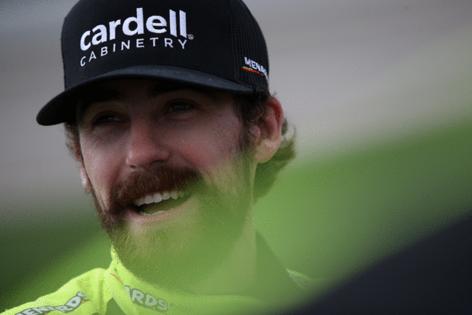 Ryan Blaney’s nickname might be YRB — “Young Ryan Blaney” — but the 27-year-old NASCAR driver is actually something like a grizzled outdoorsman. He spent Thursday morning chopping trees for firewood while donning a Paul Bunyan-like beard.

“I think (race) preparation is very important, but I think overthinking can sometimes be hurtful to you,” Blaney said Thursday.

He’s gearing up for a cutoff race weekend at Martinsville, a paperclip-shaped short track in Southern Virginia awarding a purse of just short of $7.8 million split among entrants for Sunday’s Cup event. That race will determine the four drivers competing for a championship at Phoenix the following weekend. So far, only Kyle Larson is locked in and Blaney’s sitting on the fringe, one point below Kyle Busch and just shy of the four-driver cutoff.

He entered last weekend’s race at Kansas in his best points position yet to advance to the final round at 17 points above the cut with two races to go before the finale. But late contact by Austin Dillon sent Blaney crashing into the wall and out of the running. The bottom-five finish compounded with his lack of points through the first two stages, putting a hitch in a smooth run to the championship, which would be a first in his career.

Dillon sent him a text message after the race apologizing, and Blaney feels that the situation is settled. He noted that the result still stings.

“It sucks in the moment,” Blaney said. “It definitely sucked — it still does suck — but (there’s) no reason to dwell over it now. You have another job to do, and you realize the position you’re in. You gotta move on.”

The race that he’s moving on to will bring inter-organization competition. All three Team Penske drivers, including Blaney, are below the cutoff. Brad Keselowski (minus-6) and Joey Logano (minus-26) raced for a championship last season along with Joe Gibbs Racing driver Denny Hamlin, but the veterans fell short to 2020 winner Chase Elliott in the final two races of the season.

Blaney is looking to pull a similar upset this year, as he’s had a quietly strong season that’s perhaps been overshadowed by the dominance of Larson, who has amassed nine wins in 2021. Blaney and his No. 12 Ford team have three wins so far this season, the most of his career. He finished 11th at Martinsville in the spring but has five top-five finishes at the track in 11 total Cup races.

Chase Elliott (34 points up) and Denny Hamlin (32) sit behind Larson in points standings, and depending on how Sunday’s race goes, Blaney could be the only driver representing Ford or Penske as he takes on a greater leadership role in the team with Keselowski set to move to Roush Fenway Racing next season. In evaluating Penske’s performance, Blaney said that he felt that the Ford camp has been “a little bit off pace this year” after rules changes that potentially hurt their car performance.

“I think there are five or six teams that are really, really strong, that have been strong all year, and a couple of them won’t make the championship,” Blaney said.

He said that he considered the playoff elimination format fair and that, ultimately, the strongest teams would likely be represented in the final race, with Larson already locked in and Elliott and Hamlin in good standing to advance.

“It’d be nice to join them because I thought we were top-five, kind of best overall team this year, as far as consistencies and things like that,” Blaney said. “Just gotta try to finish it out. Got one job to do this weekend, and try to do another one next weekend.”

The Cup Series Xfinity 500 race at Martinsville is 2 p.m. Sunday on NBC.

CHARLOTTE, N.C. — Members of the 2021 NASCAR Hall of Fame class anticipated their induction for more than a year, but the wait didn’t make Friday night’s ceremony any less special. It only elevated the moment.

ATLANTA — Sitting in the No. 85 stock car on a cold, windy day at Atlanta Motor Speedway, my senses are popping like the pistons and valves in the 358-cubic inch engine.

I can smell carbon, like at my dad's machine shop...Read More

Brandon Brown posted a statement on social media Thursday evening with the intention to “clear the air on some things” regarding a controversial sponsor rollout for the 2022 NASCAR season.

Brown is the driver at the ...Read More