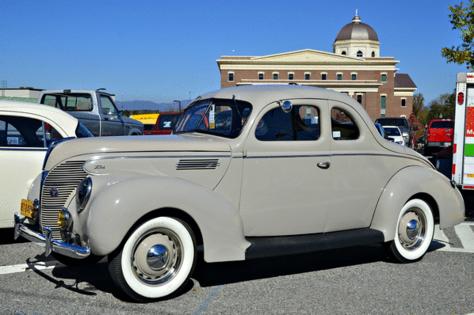 “It’s a small, small town for sure,” he said. “Especially the downtown area.”

Elliott then summarized exactly what I’d see for myself Sunday as I made the trip along Georgia State Route 400, which narrows to a single-lane road that cuts straight through the heart of the city sitting an hour north of Atlanta.

“You have the downtown area that’s very much the same as it was 50 years ago and then you have this other part of town that is just completely…” he trailed off. “It’s like two different cities honestly, so very unique.”

The word that was missing from his earlier sentence was probably something like “posh” or “new” to describe the outlet mall and surrounding restaurants in the southeast part of Dawson County. Drive 10 more minutes southeast, though, and it feels a bit like a time warp.

That’s because the city’s main attractions center on its history, which is rooted in racing. A quick trip by City Hall will tell an outsider that much. The government building is connected to the Georgia Racing Hall of Fame, and that’s connected to the Bill Elliott Dawsonville Moonshine Distillery, where an annual moonshine festival was in full swing outside its doors over the weekend.

Festival-goers trickled into the Hall of Fame, a museum for racing artifacts and hub for locals with ties to the local moonshine trippers that laid the framework for modern stock car racing. I spoke with David Sosebee, a former NASCAR driver of the 1980s whose father, Gober Sosebee, was recognized in the Hall’s inaugural class of inductees in 2002. He was known for his Daytona Beach road course wins and early moonshine runs.

“In the main heyday of it, (Dawsonville) was very much known,” Sosebee said.

Although there are hundreds of trophies and photos spanning drivers and generations in the Hall, most items come from Bill Elliott. His old helmets, uniforms and cars, including his Coors Thunderbird that won the 1987 Daytona 500 and what’s left of his No. 94 Ford after a brutal wreck with Dale Earnhardt at Talladega in ‘98, are preserved in Dawsonville to commemorate a NASCAR career that included 44 Cup wins as a beloved figure. He won NASCAR’s Most Popular Driver award 16 times, earning the nickname “Awesome Bill from Dawsonville.”

“Bill really put us on the map,” said Gordon Pirkle, a director of the Georgia Racing Hall of Fame.

NASCAR’s regular season champion will contend for a postseason championship. Kyle Larson will be one of four drivers racing for a trophy at Phoenix.