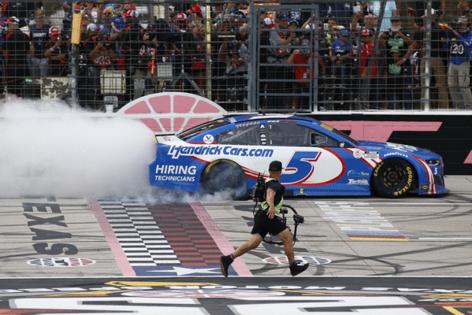 NASCAR’s regular season champion will contend for a postseason championship. Kyle Larson will be one of four drivers racing for a trophy at Phoenix.

Larson won Sunday’s Cup race at Texas Motor Speedway, the first race in the Round of 8, by overcoming multiple late-lap cautions as playoff drama unfolded around him.

Joey Logano suffered an engine issue with just over 30 laps remaining to force his early exit. After the race restarted, contact between Kyle Busch and Chris Buescher set off a spin further back in the pack. Anthony Alfredo checked up and went sliding into the outside wall. His car quickly became engulfed in flames after coming to a stop. Alfredo walked away from the wreckage, but the race was red-flagged for 15 minutes.

The field then ran three-wide once under green as playoff drivers Ryan Blaney and Denny Hamlin battled alongside Kevin Harvick for the spot, but Hamlin cut a tire after contact with Blaney, and went sliding down the track. He hit the nose of his No. 11 Toyota on the inside wall and was forced to make a long stop. The race restarted with 16 laps to go, but the challenges weren’t over for Joe Gibbs Racing drivers.

Martin Truex Jr. made slight contact with Daniel Suárez to hit the outside wall and destroy his No. 19 Toyota. He joined Logano as a playoff driver watching the end of the race from the sidelines. Hamlin was then hit in the final laps as Buescher spun into the inside wall hard. Hamlin nursed his car to an 11th place finish, while Larson held the lead through the final seven restarts and eventually through the checkered flag. Larson earned his eighth win of the 2021 season.

“I knew we’d have a good shot to win today and our car was amazing,” Larson said on NBC. “I mean, that’s probably the best 550 (horsepower) package, intermediate car we’ve had all year.”

He credited the pushes from behind with giving him the advantage on the restarts, and said that he stayed on the throttle to allow him to barely clear the cars around him going into Turn 1.