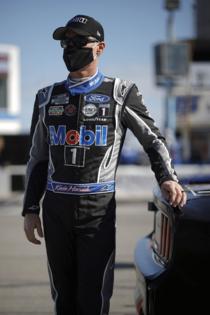 FORT WORTH, Texas — Kevin Harvick isn’t in the news as a championship contender this time around. He missed the cut into the Round of 8 last weekend, and he enters this weekend’s NASCAR Cup race at Texas Motor Speedway on the dreaded outside.

But Harvick has created headlines with his ongoing feud with fellow driver Chase Elliott and refused to say Wednesday whether that situation has been put to rest with four races left in the season.

NASCAR reportedly held a call later on Wednesday with all parties to warn of “serious consequences” if the feud continued, according to the Associated Press.

It started last month during the Round of 16’s finale at Bristol when late-race contact by Elliott ended a push by Harvick. That resulted in a heated conversation between Harvick and Elliott on pit road.

Then, last weekend at the Charlotte Motor Speedway Roval, the two tangled again when Harvick bumped Elliott and sent him into a retaining wall midway through the race.

Elliott recovered and stayed in the playoff mix, while a late crash eliminated Harvick. Elliott took a shot at Harvick during post-race TV interview, wishing Harvick and his No. 4 Ford team a “merry offseason and a happy Christmas.”

Despite NASCAR’s warning, it’d be fitting if Harvick delivered some sort of response at TMS, a track that has a history of producing heated moments. From A.J. Foyt and Arie Luyendyk infamous fight in Victory Lane in 1997 to Jeff Burton and Jeff Gordon in the fall of 2010 to Gordon and Brad Keselowski in the fall of 2014, a Harvick-Elliott scuffle has a chance to become another “moment” in TMS history.

For Harvick, though, the priority remains on getting his first win of the season. This is a driver who has won at least one race each season since 2010, including a Cup championship in 2014.