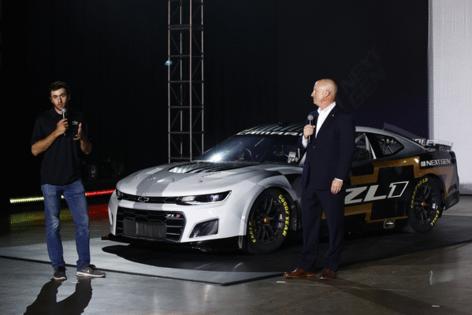 CHARLOTTE, N.C. — NASCAR teams staked out at the Charlotte Motor Speedway road course for two days following a dramatic Cup playoff race at the same venue, but lightning-quick adjustments were far in the rearview mirror.

Perhaps more accurately, they were in the rearview camera, which is one of the many new features of the Next Gen car teams will continue testing ahead of the 2022 season.

The camera is an optional feature for drivers, and it’s not the biggest difference in the new car compared with the Gen-6 model Cup teams are currently running. The changes in the new car, which include a symmetrical and composite body, independent rear suspension system and a single, center-locking lug nut (versus five smaller ones), are vast.

Some of those differences, among many others, contributed to a first day of testing at the Roval that Team Penske competition director Travis Geisler described as “excruciatingly slow.”

“I look at it like taking NFL players and asking them to go play tennis,” Geisler said. “They’re gonna be frustrated getting started cause they’re gonna suck at it.”

Geisler mentioned the seemingly “simple” practices that are part of the learning curve, such as crew members knowing which wrenches to use, a task that appears automatic in an industry that thrives on speed. But this week, teams were muddling through awkwardly timed choreography getting inside the car and ironing out issues before putting their most competitive machines on a brand new racetrack in four months. Penske driver Joey Logano called it old-school testing.

“It kind of feels like back in the late-model days where you don’t have all the computer sims to go off of to say, ‘This is where everything needs to be,’ ” Logano said. “You’re kind of — I don’t want to say — shooting from the hip, but a little bit you are as we learn.”

Next Gen test indicates progress but not perfection

The two test days included 21 cars across 18 organizations, and some drivers sharing seat time in the same vehicle. For nearly 20 hours, the low-and-loud sound of Next Gen making laps at Charlotte filled the air, with brief pauses for a few (relatively minor) spins.

In addition to crew members and engineers, drivers are still getting acclimated with a car that has steering quirks and heat issues, which NASCAR will continue to work on with teams during upcoming test sessions. The next team test is scheduled for Nov. 17-18 at the 1.5-mile Charlotte oval.