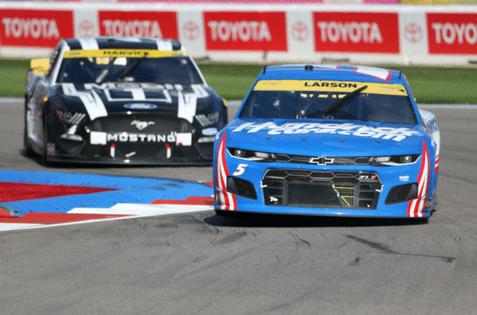 On Lap 54 — early in Stage 3 — Harvick wrecked Elliott in Turn 7, bumping him in the rear and sending him into the wall. The implications were huge. With the crash, Elliott fell from above the playoff cut line to joining Harvick just below the line.

But Elliott’s team taped up his car on pit road and he climbed his way back into the race and above the playoff cut. With 11 laps to go and Elliott closing in on passing Harvick on the road course, the No. 4 Ford Mustang driver missed Turn 1 just beyond the start-finish line and crashed into the wall, ending his day and championship hunt.

Below is a look at how every playoff driver did at the Roval with who is moving on to the Round of 8 and whose championship hopes ended in Charlotte. The number next to a driver’s name is what place they finished in Sunday.

Entered Sunday with a 22-point playoff cushion. Had some trouble in the middle of the race but finished strong. He’s almost a lock to advance to the Championship Four.