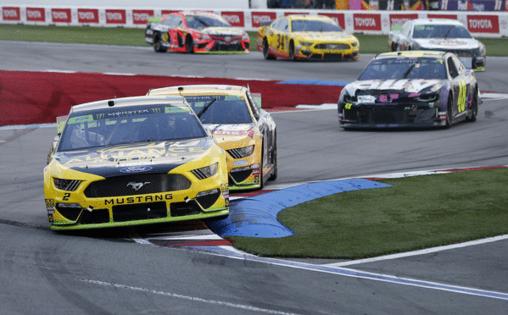 The Bank of America Roval 400 (2 p.m. Sunday, NBC) is the final hurdle for playoff drivers looking to secure a spot in the postseason Round of 8. It’s also the final road course race on a 2021 schedule rife with right turns. Some of the newness of the 2.28-mile track has worn off since its debut in 2018, but playoff teams, especially those sitting below the points cutoff, are far from relaxed.

“All the cutoff races are critical,” No. 20 team crew chief Adam Stevens said. “And being that this (race) is in the round with Talladega, you have two, what you could call, ‘wild-card races.’ ”

Stevens, who works with driver Christopher Bell, said that the playoff schedule puts pressure on teams to build up bonus points during the regular season, noting that, “Frankly, we’re not in that situation.”

Bell is one of four drivers sitting below the points cutoff (28 points behind) along with Kevin Harvick (9), William Byron (44) and Alex Bowman (52). Byron and Bowman escaped elimination in the last round after entering the cutoff race at Bristol in a points deficit. That could give them some confidence, but Byron described the Roval as a track that’s “not like other road courses” and one where “anything can happen.”

“It’s kind of its own beast,” Byron said.

Bell, Byron and Stevens identified the track’s trickiest of its 17 turns — the ones that could end any teams’ day early and where race fans can expect to see the most action this weekend.

Turn 1 and the Infield

The first turn on the course is a sharp left coming off pit road leading to the infield.

“It’s very important to make this corner as quick as you can and get up to speed,” Bell said. “Definitely the sharpest pit exit we have on the circuit.”