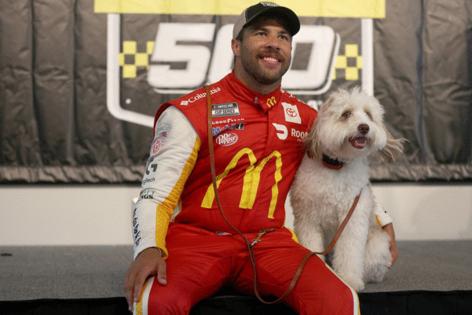 Monday’s superspeedway event was red-flagged for rain with around 70 laps remaining and Wallace, driver of the No. 23 Toyota, in the lead.

The race was considered official after reaching the halfway point, and NASCAR called drivers to a stop when more rain hit the track following an earlier weather delay. Lightning in the area compounded the weather hold, and eventually NASCAR officials made the call to end the race early just before 4:30 p.m. ET with sunset a few hours off and major track-drying efforts required.

Wallace watched atop his team’s pit box, then hugged his teammates as 23XI crew members cheered from below upon receiving the news. The 27-year-old driver won his first race in the Cup Series in 143 starts and his first race with the Michael Jordan and Denny Hamlin co-owned team, 23XI Racing, which is in its first year in the series.

Wallace said he called his fiance, Amanda Carter, and his mother, Desiree Wallace, while he walked to Victory Lane. Fellow Cup drivers and competitors Ryan Blaney, Chase Elliott and Kyle Larson approached Wallace separately to congratulate him on the win. He teared up during his first interview on NBCSN as a Cup Series winner.

“It obviously brings a lot of emotion, a lot of joy to my family, fans, friends. It’s pretty (darn) cool,” Wallace said. “Just proud to be a winner in the Cup Series.”

Wallace’s victory signified more than just a snap to his winless streak since a Truck Series race at Michigan in 2017. He became the second Black driver in history to win a race at NASCAR’s top level at a track that already held a certain significance to him.

“I was sitting in the bus after they called (the race yesterday) and I was close to texting (NASCAR president) Steve Phelps saying, ‘I don’t want a phone call,’ ” Wallace said. “Because it’s basically the same thing that happened. Rain delay, called the race, gotta race on Monday. And it’s just like, ‘Man, this is déjà vu.’ ”