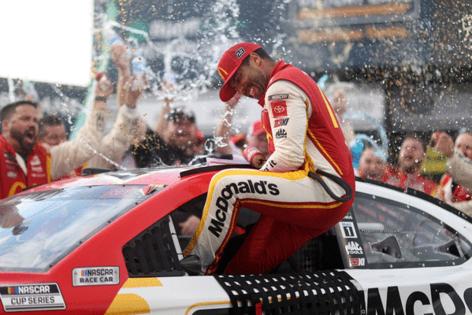 Wallace got on the phone with Frank Scott, the 74-year-old son of Wendell Scott, who was the first Black driver to win a Cup race way back in 1963. In 2,000-plus races at NASCAR’s highest level over the past 58 years, it had never been done again — not until Wallace won Monday in a rain-shortened race at the iconic Deep South track in rural Alabama.

Scott recounted his conversation with Wallace in our interview Tuesday, saying part of it went like this.

Wallace: “I felt your Dad looking down on me from heaven today.”

Scott: “Oh yeah he was. Did you hear what he was saying up there?”

Scott said Wallace screamed with laughter when he heard that line, and there’s been a lot of that sort of joy going around in the Scott family over the past 48 hours.

They’ve been cheering for Wallace to win a Cup race all year. And now — just a few weeks after the Scott family finally received the trophy from NASCAR that the late Wendell Scott had been wrongly deprived of in 1963 — Wallace has indeed won.

“It feels poetic,” Frank Scott said, who watched the race from his living room in Danville, Va., with a replica of his father’s 1963 trophy sitting just below his big-screen TV. “And it feels a little mystical.”