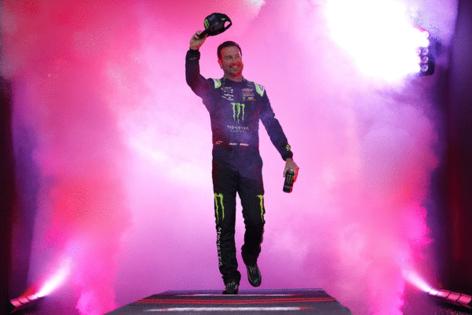 CONCORD, N.C. — Stephanie Pell stopped for a moment in front of a freshly painted pit wall at Charlotte Motor Speedway. As the pink paint dried in the sun, Pell’s eyes watered thinking about the message she wanted to share with those battling breast cancer.

Pell’s next line, however, didn’t reference her own journey as a breast cancer survivor. Instead, she spoke about her 16-year-old son, Mason Bradley, who wrote a letter to NASCAR Cup driver Kurt Busch in 2019 that has made an industry-wide impact.

Bradley’s letter suggested that Busch race with pink window netting in his No. 1 Chevrolet car to draw awareness to the fight against breast cancer and recognize survivors like his mother. Busch announced Tuesday that Bradley’s suggestion would become reality. Not only will Busch’s car use the netting, but all Cup cars will run hot pink window netting for the playoff race at the Charlotte Roval on Oct. 10.

“It was his love for the Monster car and for me as his favorite driver, I went to work,” Busch said. “I asked NASCAR about it, I asked the track, then we had to get the window nets certified.”

“It’s been a process, but I’ve been having so much fun going through it,” Busch continued. “I felt a love from the family and everybody that’s in the breast cancer world.”

As part of Busch’s desire to do his part to support breast cancer research, drivers will sign the window nets to be auctioned off through the NASCAR Foundation with proceeds benefiting research and treatment organizations.

NASCAR Xfinity driver Daniel Hemric joined Busch in supporting the cause Tuesday. The drivers participated in the annual Paint Pit Wall Pink event at Charlotte Motor Speedway along with track president Greg Walter and dozens of individuals impacted by the disease.

Hemric shared that his mother is a breast cancer survivor, and that his wife’s cousin underwent a double mastectomy within the past year, and through aggressive treatment, is now cancer-free. The driver helped paint the wall with his wife, Kenzie Hemric, and their 17-month-old daughter, Rhen. He said that the event “hit home” for multiple reasons.

“It’s one thing to have experiences, but then to have a little girl of your own, you never know what she’s going to be faced with in life,” Hemric said. “ ... If she can be a part of this not only now, but down the road, hopefully (she’ll) take the steps necessary for early prevention down the road if that’s the case. No better time than now to start.”