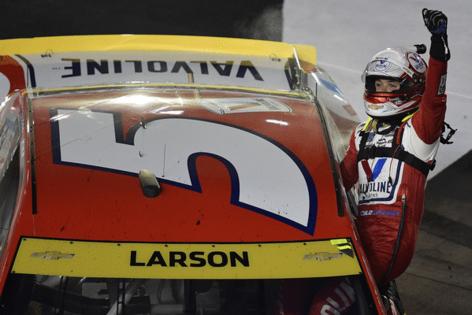 BRISTOL, Tenn. — Four of the 16 NASCAR playoff drivers saw their championship hopes dashed Saturday night, and the drama of Bristol made the final drivers into the field of 12 in question through the checkered flag. Here’s how the drivers stand:

— Denny Hamlin: Locked his spot in the Round of 12 with a win at Darlington and had another strong run at Bristol despite a ninth-place finish. He won the first stage and finished second in Stage 2, but cut a tire after contact with Kyle Larson racing for the lead with around 100 laps to go.

— Martin Truex Jr.: Was already set to advance to the next round after his victory last weekend at Richmond, but his run wasn’t nearly as dominant at Bristol. Truex started on the pole but lost his lead position early, then finished out of the top 10 in the second stage and finished in seventh.

— Kyle Larson: Was a constant leader at Bristol, winning the second stage and finishing first to close the race. Larson was already locked into the next round based on points prior to tonight.

— Joey Logano: Advanced on points before the race ended despite the first two stage finishes out of the top 10. Logano had a long pit stop early, then finished 12th in Stage 2.

— Ryan Blaney: Controlled the race in part of the final stage, battling with Bristol veteran Kevin Harvick for the top spot. He locked in his place in the Round of 12 before the third stage based on points.

— Chase Elliott: Had a relatively quiet night mid-race, but led laps in the opening stage and in the final 100 laps. Elliott pit with a flat tire after light side contact with Harvick racing for the lead. Elliott advanced to the next round based on points after Anthony Alfredo exited the race in the final round.

— Christopher Bell: Advances to the next round on points after posting a third-place finish last weekend at Richmond. Bell pit under green late in the race with bad damage to his car body.

— Brad Keselowski: Had a solid night, with an sixth-place finish and will advance on points.

— Kyle Busch: Pit under green flag conditions with around 40 laps to go. He finished in 21st.

— Alex Bowman: Entered the final stage nine points above the cutoff and was told he was racing his teammate William Byron for the transfer spot. Both Bowman and Byron raced in the top 10 in the final stage.

— William Byron: Entered the final stage down nine points to the cutoff, and raced up to fifth with around 75 laps remaining.

Drivers out of the playoffs

— Aric Almirola: Bounced back from a leaking oil line early in the race as he sat close to the cutoff prior to Saturday night. Almirola sat at +16 entering the final stage after overcoming early drama, but fell to running in 17th and just +1 in the last 80 laps with Hendrick Motorsports cars in the top 10.

— Kurt Busch: Said he was hoping for a “nice, smooth night” prior to Saturday's race as he entered tied with Alex Bowman in points at the cutline, but Busch’s night wasn’t nearly as smooth as he needed. He struggled with the balance of his car and raced a lap down for much of the final stage.

— Tyler Reddick: Also needed a stronger run to advance to the next round. Reddick ran in the bottom 20 for much of the race, was able to unlap himself in the final stage, but it wasn’t enough.

— Michael McDowell: Needed a win to advance, but raced at least one lap down for most of the race. This is the end of the postseason run for the Daytona 500 winner.