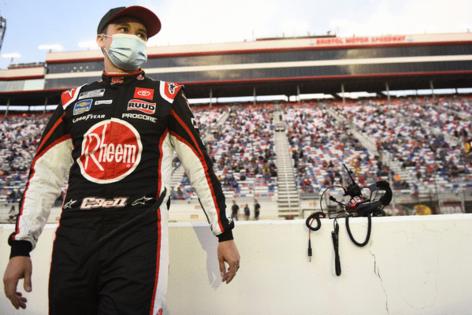 The 26-year-old from Oklahoma won his first Cup race earlier this season and is in the midst of his playoffs debut. Bell, driving the No. 20 Toyota for Joe Gibbs Racing, is coming off a third-place run at Richmond last weekend and is in position to advance to the next round of the playoffs going into Saturday’s race at Bristol.

As much as Bell is focused on the playoffs, he’s also eyeing a return to Texas Motor Speedway next month. Bell considers TMS his home track and the Autotrader EchoPark Automotive 500 is one month away (Oct. 17).

The Star-Telegram caught up with Bell recently about his breakout season and the upcoming TMS race.

— Q: Overall, how would you assess your season so far?

— A: “It’s been up and down for sure. Obviously I started off the season on a really high note winning my first ever Cup race (on the road course at Daytona International Speedway), which was really special to get that done at the ‘World Center of Racing.’ That’s something I’ll cherish for the rest of my life. Since that point, it’s been a yo-yo of ups and downs. We’ve had some good runs and some not so good runs.

“I just want to get to the point where we’re consistently running in the top five and being more competitive. I think we’re gaining on it for sure.”

— Q: Getting the first win is hard. Is getting the second even harder?

— A: “They’re all hard to get. The Cup Series is really competitive right now. It’s just tough. None of these races are going to be easy, but I think we’re more than capable of winning multiple races in the closing part of the year. We just have to put our foot forward and try to execute that.”

— A: “Texas Motor Speedway is definitely my home track. It’s a place that has been really good for me. Last year I was able to finish third. That was really good and a highlight of the year last year for sure. It’s a place I’m looking forward to going back to. At the All-Star Race, we didn’t have a great showing but I think we learned a lot. We’ll be able to come back stronger than ever.”

— Q: Are drivers more comfortable with the layout now that it’s been a few years (TMS repaved its track in 2017)?

— A: “I think so. It’s definitely been a change of pace from what we’ve had in years past. Each time that we go back there, it’s always a little bit different with the PJ1 that they put down. It’ll be interesting to see the track preparations, what goes on this fall and that always plays a major role in the racing product that we have on track.”

— Q: Finally, how odd will be it coming to a race at TMS without Eddie Gossage running the show?

— A: “We’re going to miss Eddie. He was one of the best promoters in the sport. He’s been great to me. I wish him nothing but the best. I hope that I still see him around.”

The two-time series champion had an early exit on Sunday in the Cookout Southern 500 at Darlington.