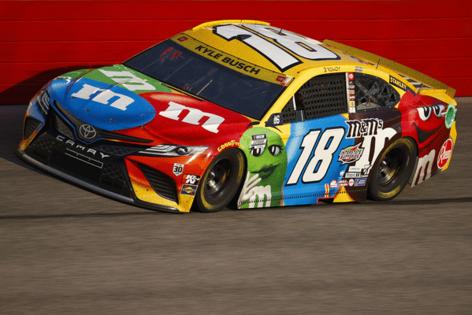 The penalty stems from an incident in which Busch drove his No. 18 Toyota at an excessive speed into the garage area, hitting multiple cones and sending people near the entryway scattering. Busch drove his car into the area after crashing out of the race early in the second stage. His exit came after Austin Dillon made contact with his car to send him into the wall.

“Wasn’t the 3’s (Dillon’s) fault,” a frustrated Busch said on NBCSN. “We will just take our lumps. We were running like (crap) and that is what you get when you run like (crap).”

Section 12.5.2.5.a of the NASCAR rulebook states that “Any violations deemed to compromise the safety of an Event or otherwise pose a dangerous risk to the safety of Competitors, Officials, spectators, or others are treated with the highest degree of seriousness. Safety violations will be handled on a case-by-case basis.”

NASCAR senior vice president of competition Scott Miller addressed the situation on NASCAR SiriusXM Radio on Tuesday saying, “It was a situation that could have been bad.”

“Fortunately, nobody got hit or anything like that. It all worked out, but putting people in harm’s way for no reason is something we take seriously,” Miller said.

Busch finished the race 35th (of 37) and is ranked below the 12-driver cutoff to advance to the next round of playoffs on points heading to Saturday’s race at Richmond.

The two-time series champion had an early exit on Sunday in the Cookout Southern 500 at Darlington.

Intensity was at its peak for 165 laps, but most of the action came in the final 20 of Saturday’s Cup race at Daytona International Speedway.

Six of the top 10 drivers lined up for the overtime restart needed a win to ...Read More

Before Wendell Scott died in 1990, he accurately predicted the future.

The former NASCAR driver, team owner and mechanic had a hunch that he would eventually receive his rightfully-deserved recognition.

Stewart-Haas Racing has two drivers locked into the postseason heading into NASCAR’s regular Cup season finale this Saturday at Daytona, but team owner Tony Stewart still sees much room for improvement at the four-car ...Read More