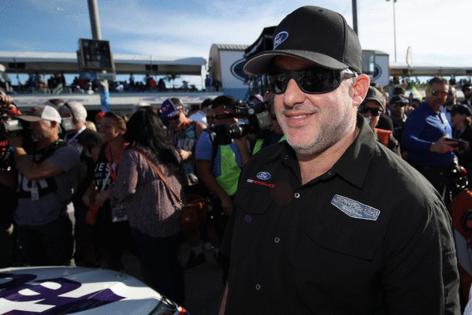 Stewart-Haas Racing has two drivers locked into the postseason heading into NASCAR’s regular Cup season finale this Saturday at Daytona, but team owner Tony Stewart still sees much room for improvement at the four-car Cup operation.

“It’s not been a season that we’re proud of by any means,” Stewart said. “We definitely have a problem in our organization, and it’s not with people. But there’s something that we’re missing on that’s cost us the entire season up to this point and we can’t find it, but we know there’s something fundamentally wrong.”

Aric Almirola, driver of the No. 10 Ford, secured what many considered an upset victory at New Hampshire with an average finish of 22.7 prior to that race. He was the first (and so far only) driver from SHR to win a race this year. No. 4 driver Kevin Harvick locked in a postseason spot last weekend on points. No. 14 driver Chase Briscoe and No. 41 driver Cole Custer are both ranked out of the top 20 in points.

Harvick won nine races and the regular-season championship in 2020, a year in which all four SHR drivers were in the 16-team playoff field. Stewart said the team hasn’t been able to identify a singular reason for the organization-wide performance drop, but he cited NASCAR’s rules changes that have meant closer technical inspection of the racecars, as well as the industry-wide parts freeze in preparation for the Next Gen car in 2022.

“That’s the first part of the solution: Is knowing what the problem is,” Stewart said. “So it’s frustrating because we’re all sitting there scratching our heads trying to figure out what is wrong and what’s going on ... We’re kind of in a weird year where parts are frozen on the motor side and on the chassis side, and there are some of the parts and components that we are not allowed to develop, so those parts were submitted last fall and we’re stuck with those.”

“... We’re having to make the best with what we have,” Stewart continued. “I think some of the other teams probably found some stuff late in the season last year that was a good move for them, and that got them locked into those parts for this year. We just got ourselves behind ... We have to figure out how to make it work for the rest of the season and go forward.”

Team Penske driver Brad Keselowski weighed in on Stewart’s comments on Twitter, saying, “These are very fair comments not just for his team but for all the teams.”

“Even when you know how to get better it’s Super hard to get better with the parts freeze,” Keselowski wrote. “Next year will be a big reset for a lot of teams when we switch to nextgen cup cars.”

Keselowski won the race at Talladega in the No. 2 Ford and is locked into the playoffs along with all Penske teammates, No. 12 driver Ryan Blaney and No. 22 driver Joey Logano.

Despite half of SHR’s drivers having secured a postseason berth so far, Stewart said the organization is focusing “100 percent of its efforts on trying to win a championship this season” before pivoting to next year. Teams began receiving Next Gen parts in late July.

“There’s not one organization in the field that’s gonna go, ‘You know what? We’re gonna not worry about these 11 races and we’re just gonna worry about next year,’ ” Stewart said. “The teams that will be in that position are the teams that don’t make the playoffs and have that ability to not worry about racing for a championship.”

The final race of the regular season is 7 p.m. Saturday on NBC, and the goal is the same for Stewart and SHR.

“We have partners and drivers that want to win and as a car owner I want to win,” Stewart said. “So we’re not throwing this season out the window by any means. We’re gonna throw everything we’ve got at it.”

NASCAR Cup Series director Jay Fabian has stepped away from his role in response to multiple animal cruelty charges.

NASCAR’s Cup Series has one race remaining in the regular season as drivers battle for points heading into playoffs. The Coke Zero 400 at Daytona is 7 p.m. Saturday on NBC.

Below are The Charlotte Observer’s power ...Read More

Smith, 52, was a longtime running back for the Dallas Cowboys and rushed...Read More

NASCAR is further tightening its COVID-19 protocols by limiting interactions in the competition area at the racetrack. The sanctioning body announced updates to its pandemic protocols Tuesday that will go into effect ...Read More