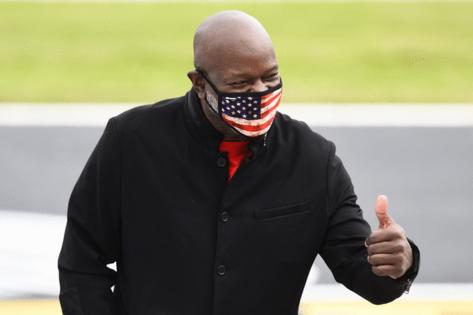 Smith, 52, was a longtime running back for the Dallas Cowboys and rushed for more than 18,000 yards during his NFL career. He’s held the league’s all-time rushing yards record since 2002. Iwuji, 34, played football for the United States Naval Academy before becoming an officer in the U.S. Navy Reserve and pursuing a career as a stock car racer.

Iwuji is slated to be the driver for the team, which is attempting to obtain a license to join the series in 2022, according to the report. He’s one of the two Black drivers who regularly competes in NASCAR national series events along with Cup driver Bubba Wallace.

Smith and Iwuji said that the team will aim to help diversify the NASCAR industry, which is mostly white. Smith said the objectives for the team, called Jesse Iwuji Motorsports, include Iwuji “fulfilling his dreams and goals but then creating opportunity for others to follow.”

“Now that the opportunity has presented itself, whether NASCAR or the NFL or any other sport or Corporate America, the opportunity to engage with minority entities and minority companies is vast,” Smith told NBC Sports. “And all people are asking for is an opportunity to even prove themselves. That’s all Jesse is asking for is an opportunity to prove himself and prove he belongs at this level. So this is another way to continue to expand and penetrate communities through an individual like Jesse and the team we’ve assembled together to really spread awareness and create hope for others.”

NBA legend Michael Jordan and international music icon Pitbull similarly entered NASCAR this year as team owners with a goal of growing diversity in the sport. Jordan is a co-owner of 23XI Racing, which fields a car driven by Wallace. Pitbull is partnered with Trackhouse Racing, fielding a car driven by Mexican-born driver Daniel Suárez. New Orleans Saints running back Alvin Kamara partnered with Hispanic driver Ryan Vargas to sponsor Vargas’ Xfinity Series car at Daytona. (Kamara has since expanded his presence in the sport as a Growth and Engagement Advisor for NASCAR.)

Iwuji has made 14 starts in the NASCAR Truck Series over the last four seasons and five starts in the Xfinity Series since last season. He met Smith last year at Texas Motor Speedway, where Smith’s company, Notable Live, sponsored Iwuji’s car for a race. Smith gave the command to start engines, along with his son, at the race and said he had already followed the sport.

“I’m from Florida, and I know all about Daytona Beach,” Smith said. “I know you call Dale ‘The Man.’ I know a lot about NASCAR.”

Smith and Iwuji are part of the four-partner ownership group, which also includes Iwuji’s agent Matt Casto. He told NBC Sports that the team was in “deep talks” with multiple manufacturers and would announce a manufacturer, sponsors and possible team alliance at a later date.

NASCAR is further tightening its COVID-19 protocols by limiting interactions in the competition area at the racetrack. The sanctioning body announced updates to its pandemic protocols Tuesday that will go into effect ...Read More

Below are The Charlotte Observer’s ...Read More