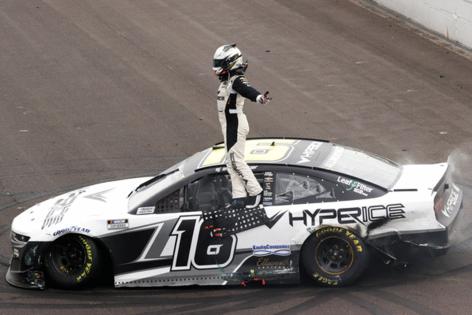 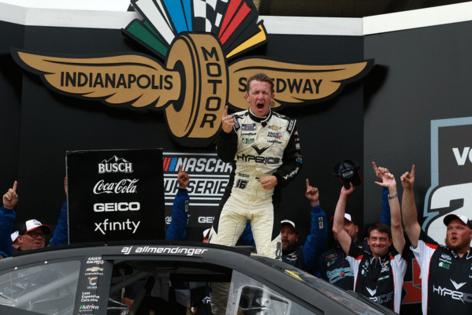 NASCAR’s first Cup race at the Indianapolis Motor Speedway road course was setting up to finish in predicable fashion in the final 10 laps. Kyle Larson was in the lead. Chase Elliott’s car fell off the jack on pit road, which meant he would have to overcome a setback to get to the front.

NASCAR fans have seen that story before, as recently as last week.

Instead, what ensued on Sunday was two overtime restarts, an airborne car, and a veteran-rookie drag race that culminated in a victory for a different driver who has made just four starts in the series over the past three seasons.

A.J. Allmendinger won the Verizon 200 at the Brickyard for his second career Cup win. He isn’t racing for the championship — he’s a part-time driver in the series competing for Kaulig Racing in select road course events.

“In my wildest dreams I could never imagine the way that just played out,” Allmendinger said.

In the final five laps of the originally-planned 82-lap race, the curbing in Turn 6 broke to send multiple drivers spinning into the wall in a massive heap. William Byron, Joey Logano and Daniel Suárez were among those impacted, with Logano hitting the tire barrier. NASCAR red-flagged the race and removed part of the curbing, which created a ramp-like chute with the remaining configuration.

NASCAR was racing for the first time in series history at the Indianapolis Motor Speedway road course, rather than its traditional oval. IndyCar and NASCAR’s Xfinity Series raced at the track the day prior.

The Cup race had barely gone green in overtime after a long delay to clean up oil from a damaged car when more drivers, including Tyler Reddick, who won the first two stages, and Richard Childress Racing teammate Austin Dillon, were caught up in the next set of wrecks. Michael McDowell went flying through the air at the same spot to set off that series of spins.

Denny Hamlin, who was in the lead at the time, summarized the scene: “What a mess,” he said.