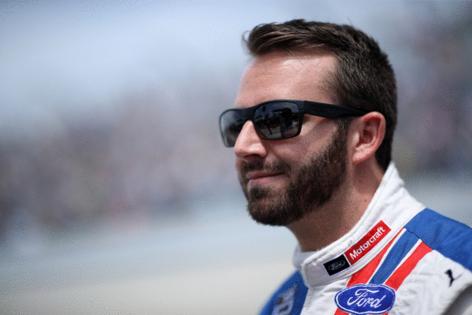 Cindric, the 2020 Xfinity Series champion, was previously slated take over for No. 21 Ford driver DiBenedetto next year. Team Penske and Wood Brothers Racing have a technical alliance that means Penske supplies cars and is involved with crafting driver lineups.

Burton has been a full-time Joe Gibbs Racing driver in the Xfinity Series since last year. He earned four wins in the series in 2020 and has five top-five finishes (11 top-10s) in 18 races this year. The 20-year-old driver from Huntersville is the son of NASCAR on NBC race analyst and former Cup driver Jeff Burton.

“As a team owner, you always want to keep an eye for the future and what’s best for your organization in hopes to set yourself up for success long-term,” Wood Brothers co-owner Eddie Wood said in a statement. “As things have progressed and changed over the last few months, we had the chance to look at what our options are and when we determined that Harrison would be available for our team, we wanted to jump at the opportunity to work with him.”

The team will announce sponsorship for 2022 at a later date, but confirmed it will include support from Ford Quick Lane and Motorcraft. The moves for the teams appear future focused, but the factor precipitating the changes likely involves Keselowski’s exit from Penske. The 37-year-old driver and former Cup champion signed a one-year contract extension with the team last season to carry him through this year.

Keselowski has reportedly accepted an offer to move to Roush Fenway Racing as a driver and part team owner. Motorsport.com reported in May that Keselowski was considering the offer, and although Keselowski has not confirmed his transition, Thursday’s announcements indicated that this will be the likely outcome.

While Burton’s move might be seen as a greater surprise, with the driver moving between teams and manufacturers, Cindric seemed like the natural replacement for Keselowski. He is the current Xfinity Series points leader driving the No. 22 Ford for Team Penske in the lower series and has made six starts in the Cup Series this season driving the No. 33 car for the organization. His father, Tim Cindric, is president of Team Penske. With the 22-year-old driver’s strong performance in the Xfinity Series, rather than if, it was more a question of when his full-time Cup debut with the team would come. Fans received an answer this week.

“Austin is a champion and has proven his abilities both on and off the track,” Penske team owner Roger Penske said in a statement. “The Cup Series is a big step for any rookie but making this move now, in conjunction with the introduction of the new NextGen car, makes sense. He has gained valuable experience this year competing in a handful of races at the Cup level and he has shown that he belongs out there.”

The news means the greatest outstanding player involved in the changes is DiBenedetto, who posted a raw video online Thursday reacting to the announcement. The driver remained with the Wood Brothers this year after a decision on his contract extension for 2021 was unknown until late in the season. In the video, DiBenedetto asked that his many fans not “beat up on the Wood Brothers.”

“They’re family to me. Always will be,” he said.

He also shared that he learned about the decision Wednesday and said that his No. 21 team “wasn’t clicking.” The team switched crew chiefs after the race at Sonoma. Jonathan Hassler replaced Grew Erwin on the pit box for the last five races. DiBenedetto’s best finish so far was fourth place at Kansas with Erwin.

“It sucks because we finally got that chemistry and teamwork where it needs to be,” DiBenedetto said. “... Now I’m sitting here in a similar situation and not knowing what the future is gonna hold and we’ll figure it out.”

Kyle Larson has dominated the 2021 NASCAR season with Hendrick Motorsports and he’s not going anywhere. The team on Wednesday announced a one-year contract extension for the Cup driver through the 2023 season with ...Read More

Below are The Charlotte Observer’s NASCAR power rankings for the week of July 12. ...Read More