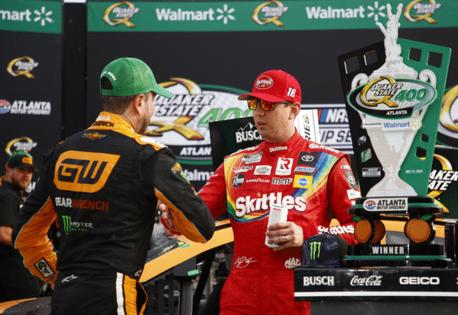 Below are The Charlotte Observer’s NASCAR power rankings for the week of July 12. This list is updated each week.

— Kurt Busch (previously unranked) breaks into our Power Rankings with a dominant win last Sunday at Atlanta Motor Speedway. Busch led 144 of 260 laps and won the race, passing brother Kyle Busch with 25 laps remaining, for his first victory this season. He secured a playoff berth and earned his third top-five finish this season.

— Alex Bowman (+1) finished fourth at Atlanta for his sixth top five this year. He was also in the top five for each stage finish Sunday to recover from the previous weekend’s struggles at Road America, where he finished 22nd.

— 3. Chase Elliott (no change) started on the pole at Atlanta and finished in seventh place at his hometown track that has historically not been his best. Sunday’s finish was his best at the track since a fifth-place finish in 2017. Elliott has 12 top 10s (nine top fives) and two wins this year, both of which have been at road courses.

— 2. Kyle Larson (-1) received a speeding penalty in the final stage of Sunday’s race at Atlanta to send him to the back of the field. He finished 18th after leading the most laps at the track earlier this year. Larson also finished 16th at Road America the week prior, leaving us to wonder whether the No. 5 team’s reign is over.

— 1. Kyle Busch (+1) battled his older brother for many laps at Atlanta. The brothers exchanged the lead three times during the race, but it was Kurt who made the last pass. Kyle still led 91 laps and finished in second place for his 10th top-five finish this season and fourth top-three finish in a row. He dethrones Larson this week.