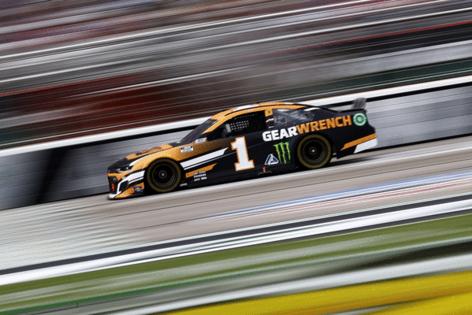 “I sure am glad to win the final Xfinity Series race on a real Atlanta racetrack,” Busch said Saturday. “Because the next one is just going to be a showpiece, and it’s going to be sh--.”

In addition to repaving the surface for the first time since 1997, the track will also be narrowed from 55 feet to 40 feet (52 feet on the frontstretch, 42 feet on the back stretch and 40 feet in the turns). Banking will widen from 24 degrees to 28 degrees.

Austin Dillon, like Busch, said he’s in favor solely of a repave rather than the reconfiguration. He’s of the opinion that NASCAR, Atlanta Motor Speedway and track operator Speedway Motorsports Inc. shouldn’t mess with something good.

“We don’t want a Texas, Kentucky situation here,” Dillon said. “I think we like the way this track races. If you just pave it, do it like Kansas did, I think we can have good races, fast here.”

Ryan Blaney said that while he hasn’t discussed the changes with many other drivers, he hadn’t heard anyone express favor for it. Kevin Harvick and Denny Hamlin are similarly opposed to the reprofiling.

“We’ve just gotta stop with the novelties,” Hamlin said. “Be what we’re good at and let’s just do that. Like why are we trying to reach outside what NASCAR’s always been about for a long time? Trans Am is not as popular as us for a reason.”

Speedway Motorsports officials have pitched the changes as facilitating “close, competitive racing” and said the project follows months of testing through iRacing, but drivers scoffed at the notion that simulation provides better feedback than human experience. Their frustration also stemmed from a lack of consultation over the plans. They learned of the project during the track’s announcement Tuesday.

Speedway Motorsports vice president of operations and development Steve Swift said Tuesday that not many drivers were asked for their input and explained that how drivers prefer to race is at odds with what fans want to see. Hamlin tweeted Saturday that he requested to know which drivers were consulted, but did not receive any names from SMI. Speaking to the media Sunday, Hamlin called the relationship between drivers and NASCAR stakeholders, such as the sanctioning body and SMI, “broken.”

“I just think that the drivers feel super disconnected,” Hamlin said. “That our input is not asked. Not because we’re looking out for ourselves but I think what they’re trying to accomplish is not feasible under with the current configuration with what they’re going for.”

“I’m of the opinion that they just don’t care,” he said. “They just do what they want.”

“This isn’t the first time we’ve had the repave talk and uproar over the pavement,” he continued. “But this is the first time that everybody’s had the plan pitched on them three days before the race and said, ‘iRacing designed this.’”

He said his criticism was “nothing personal against iRacing” and summarized: “You can’t have a bunch of suits designing a race track.”

Sunday’s Quaker State 400 will be the Cup Series’ final race on the current Atlanta surface.

The race was red-flagged with less than 100 laps left for repairs to the surface when a chunk of track came up on the frontstretch. A new surface will debut next year for NASCAR’s Next Gen car.