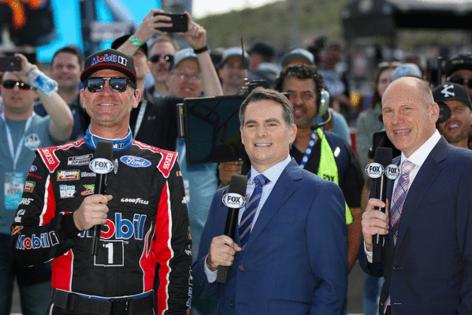 CHARLOTTE, N.C. — Jeff Gordon will continue his duties as a Fox Sports broadcaster through the NASCAR season and 2021 calendar year, then he will turn his attention full-time to a new role at Hendrick Motorsports. The NASCAR Cup team announced Wednesday that Gordon has been named vice chairman of the organization.

He will assume the new role on Jan. 1, 2022 and will be second-ranking to team chairman and majority owner Rick Hendrick.

“I cannot put into words what Hendrick Motorsports means to me,” Gordon said in a statement. “In many ways, it’s my home and the people here are my family. I’ve never lost my passion for the organization, for our sport, and for the sheer challenge of racing and winning at the highest level.”

Gordon, a NASCAR Hall of Famer, has a storied history with the organization he shared four Cup championships and 93 race wins with as a driver from 1992 to 2015. He became an equity owner of Hendrick Motorsports in 1999. In 2016, Gordon joined Fox Sports’ NASCAR programming team as a race day analyst.

“Rick and I have a shared vision,” Gordon, 49, said. “Which is based on the values he’s instilled, the culture he’s built and our desire to be the very best in all categories, on and off the track.”

Hendrick, 71, said he has “no plans to go anywhere anytime soon” but the promotion for Gordon will set him up as Hendrick’s eventual predecessor.

“I’ve always been impressed with his business instincts,” Hendrick said in a statement. “On some level, he’s been involved in every major decision we’ve made over the last two decades, and his influence has continued to grow since he stopped driving.”

In his new role, Gordon will work daily at HMS focusing on the organization’s competition and marketing. He will report to Hendrick and work alongside HMS president Marshall Carlson and general manager Jeff Andrews. Gordon will also join Hendrick on NASCAR’s team owner council and assume Hendrick Motorsports’ seat on NASCAR’s diversity, equity and inclusion committee, giving him greater influence in the how the sport develops.

Hendrick called Gordon’s new role the “natural evolution for him and our company.”

“He understands our culture, our values, and the importance we place on our people and our partnerships,” Hendrick said. “I love racing and competing, and Jeff is the only person I know who hates to lose as much as I do.”

Hendrick Motorsports is the winningest Cup Series team and holds the all-time record number of championships with 13 titles. The organization has won at least one race each season for the last 36 years. This year, all four Hendrick Motorsports drivers, Kyle Larson, Alex Bowman, Chase Elliott and William Byron, have won at least won race before the season’s halfway point. No. 5 driver Larson, who Gordon was instrumental in helping bring to the team this season, leads the series in wins with four victories in 2021.

“In the years to come, I couldn’t be more energized about working arm-in-arm with him and cementing the future of Hendrick Motorsports together,” Hendrick said.

“While we are sad to see him go, everyone at Fox Sports wishes Jeff nothing but continued success,” Shanks said in a statement.

Gordon thanked the network for the opportunity to help bring racing broadcasts to fans. He shared the booth this year with lead race announcer Mike Joy and analyst Clint Bowyer, who joined the Fox team this year after retiring from NASCAR Cup racing at the end of the 2020 season.

“I’ve come to truly appreciate the responsibility of bringing the sport to our fans and the tremendous work that goes into our broadcasts each and every week,” Gordon said. “I’m certainly going to miss it, but I will forever be grateful to Fox for the experience and for the trust they’ve placed in me. It’s been a privilege to work with such a talented group of people.”

NASCAR’s broadcasts have switched to NBC’s networks for the second half of the season, but Gordon will continue to work as a Fox broadcaster through the end of the year.