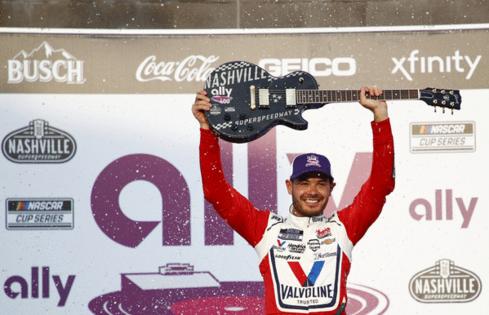 NASCAR is preparing for a doubleheader weekend at Pocono Raceway. The first of two Cup races this weekend is Saturday at 3 p.m. on NBCSN. The second race at Pocono is Sunday at 3:30 p.m. also on NBCSN.

Below are The Charlotte Observer’s NASCAR power rankings for the week of June 21. This list is updated each week.

— Alex Bowman (-1) finished 14th at Nashville and out of the top 10 in each stage. Prior to Sunday, Bowman was riding a wave of top 10s, finishing no lower than ninth in four races. This week Bowman drops a spot to Kyle Busch, who finished a few positions ahead of him in 11th.

— Kyle Busch (+1) also broke his top-10 streak at Nashville, entering the race with three top-10 finishes in a row. However, Busch struggled with the balance of his car throughout the race, reporting to his team that it was both tight and loose on different parts of the track. He earned points with top-five finishes in the opening two stages, and fell to 11th for the finish.

— 3. Chase Elliott (-1) looked like a strong contender early at Nashville. He won the first stage and finished in the top 10 in the second stage, but Elliott crossed the finish line in 13th after four races in a row placing no lower than third. Then, his No. 9 car was disqualified post-race for five loose lug nuts, meaning Elliott didn’t earn his original stage points and dropped to last place.

— 2. William Byron (+1) bounced back from a 35th-place finish after a crash at Sonoma to place third at Nashville. He has seven top-fives this season and 13 top-10s. Byron is also now ranked third in points (605) behind series points leader Denny Hamlin (686) and Kyle Larson (676).

— 1. Kyle Larson (no change) hasn’t stopped winning. He’s on a three-win streak (four-win streak, including the All-Star Race at Texas) and has led more than 80% of laps combined in those races. He finished with a 4.3-second lead over second-place finisher Ross Chastain at Nashville and now has the most wins in the Cup Series this season with four.