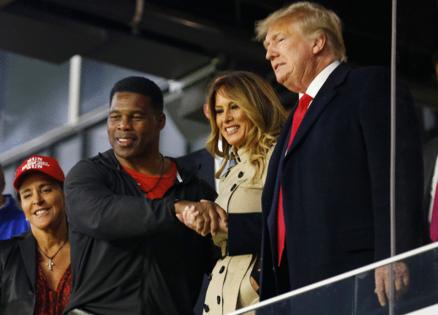 Do you remember that Donald Trump has already thrown his hat in the ring for the 2024 presidential election? Odds are it slipped your mind, on account of more-or-less general indifference not only from a media that seems to have finally learned some lessons, but even a national GOP that has at last tired of his toxicity.

Regular readers of these pages will know that we have painstakingly detailed the many, many reasons that the former New York real estate promoter and lifelong fraudster is constitutionally, categorically unfit to run a hot dog stand, let alone the nation’s executive branch. Yet in this cynical game of politics, the coin of the realm is often not fitness but electoral firepower, and many prominent Republicans swallowed their pride and threw in their chips with the man they thought could deliver.

Much to their chagrin, and the country’s benefit, even on that front the former president is bankrupt, as again demonstrated by the loss of handpicked candidate Herschel Walker in the Georgia Senate runoff, after the former football star managed to keep incumbent Raphael Warnock under 50% in November. But in the second round, Warnock prevailed, crucially handing Chuck Schumer a 51-seat majority that will increase his maneuverability over the current 50-50 power-sharing deal.

That’s thanks to Trump, who delivered losses with Walker and other crackpot contenders like Mehmet Oz and Kari Lake and Doug Mastriano. You could say that these terrible candidates lost on their own incompetence, but that they were selected and bolstered by Trump, often over more mainstream candidates. That a few Trump flunkies like J.D. Vance proved exceptions to the rule by stumbling across the finish line only highlights how frequently the president’s backing is now a kiss of death.

With Trump’s influence dead and buried at the polls, the GOP should move beyond him, unless they want to keep losing important races for federal and state office. And if they want the top job, a third time with Trump would be hopeless.