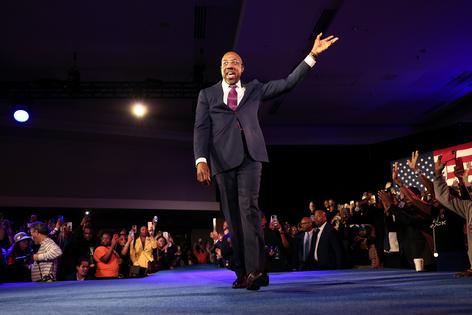 “I am Georgia,” Warnock said. “A living example and embodiment of its history and its hope, of its pain and promise, the brutality and possibility.”

Warnock’s senate campaign against his Republican challenger, Herschel Walker, occurred at a time when Georgia voters faced a slew of new election law reforms that the state’s lawmakers said were necessary to protect election integrity. But civil rights advocates characterized the reforms as the latest version of suppression efforts targeting Black voters.

During his speech, Warnock was clear on his position.

“The fact that millions of Georgians endured hours in lines … that wrapped around buildings and went on for blocks, lines in the cold, lines in the rain, is most certainly not a sign voter suppression does not exist,” Warnock said. “Instead, it is proof that you, the people, will not allow your voices to be silenced.”

As the campaign unfolded, The Conversation published several articles looking at the history of voting in Georgia and how race has played a significant role in shaping the state’s election laws.

Georgia’s GOP lawmakers overhauled the state’s election laws in 2021 – and critics argued that the target was Black voter turnout, not election fraud as claimed by Georgia Gov. Brian Kemp and other white conservative politicians.

Despite its racist history, Georgia’s runoff voting process is not inherently racist – as the 2022 campaign demonstrated with two Black men running against each other.