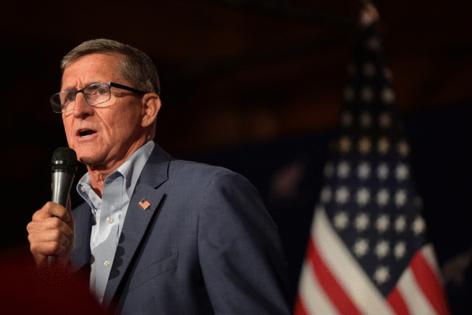 The special grand jury is investigating whether former President Donald Trump and his allies criminally interfered with Georgia’s 2020 elections. Flynn’s testimony was sought because of comments the former U.S. Army lieutenant general made in the weeks following the elections and a White House meeting he attended in which invoking martial law and seizing voting machines were reportedly discussed.

Flynn had tried to quash his out-of-state summons in his home state but a Florida judge and the state appeals court ruled he had to testify. His appearance Thursday was markedly different than those by other high-profile witnesses because of the presence of armed law enforcement officers, including three sheriff’s deputies with automatic weapons keeping watch on the courthouse steps.

Flynn, 63, walked into the courthouse shortly before 1 p.m. and declined to answer questions from the news media. He left about 90 minutes later.

Flynn served as Trump’s security adviser for three weeks in early 2017. He resigned after it was revealed he misled Vice President Mike Pence about the nature of his communications with Sergey Kislyak, then Russia’s ambassador to the U.S. Later that year, Flynn pleaded guilty to making false statements to the FBI during Special Counsel Robert Mueller’s investigation into Russian interference in the 2016 election.

Trump granted Flynn a full pardon just three weeks after the 2020 presidential election. Less than a month later, on Dec. 17, 2020, Flynn said in an appearance on Newsmax that Trump could use the military to seize voting machines and re-run the election in swing states. The next day, Flynn was inside the White House with attorney Sidney Powell and other Trump campaign officials, reportedly discussing martial law, seizing voting machines and appointing Powell as a special counsel to investigate the elections.

During a court hearing in Florida, Fulton prosecutor Will Wooten indicated the special grand jury wanted to ask questions about the circumstances of Flynn’s pardon.

Since he left the White House, Flynn has become a prominent figure among conspiracy theorist, far-right and Christian nationalist groups. He’s spent the last two years crisscrossing the country promoting his group, ReAwaken America. It has been described by the Associated Press as a “recruiting tool for an ascendant Christian nationalist movement that’s wrapped itself in God, patriotism and politics and has grown in power and influence inside the Republican Party.”

It is possible that during his special grand jury appearance Flynn invoked his Fifth Amendment privilege to not answer questions on the grounds that his testimony could be incriminating. He did so when appearing before the Select Committee on Capitol Hill investigating the Jan. 6, 2021, insurrection.

U.S. Rep. Liz Cheney, vice chair of the panel, asked, “General Flynn, do you think the violence on Jan. 6th was justified?”

Flynn’s lawyer then asked the congresswoman if he could confer privately with his client. About 90 seconds later, Cheney was asked to repeat the question, which she did.

When Cheney said she was asking both questions, Flynn invoked his Fifth Amendment right to remain silent.

In court filings, Fulton prosecutors have said Flynn “possesses unique knowledge concerning communications between himself and other known and unknown individuals involved in the multi-state, coordinated efforts to influence the results of the November 2020 election in Georgia and elsewhere.” And they said his testimony was also likely to reveal additional sources of information.