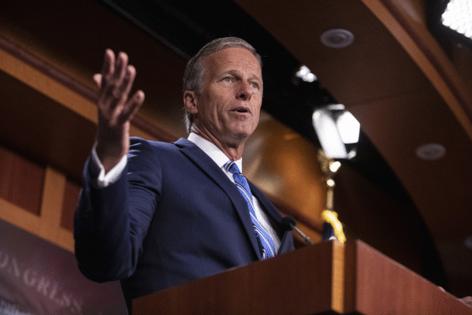 WASHINGTON — Former President Donald Trump’s persistent false claims about the 2020 election were an obstacle for GOP candidates and a leading reason the party performed poorly in the midterms, the Senate’s No. 2 Republican said.

“I think his obsession with the 2020 election became an albatross and a real liability for people who were running, especially in swing states,” Senator John Thune told reporters a day after Democratic Senator Raphael Warnock was reelected in a Georgia runoff against Trump-backed Herschel Walker.

Warnock’s win cemented a 51-49 majority next year for Democrats, despite earlier predictions that the GOP would take power in the Senate. Republicans did win control of the House, but will have a much smaller majority than expected.

Trump’s insistence that candidates he endorsed back his claim that he won and Joe Biden lost in 2020 was a significant setback for the party, Thune said.

Trump is currently the only Republican to launch a presidential bid for 2024, but Thune said he expects other Republicans to challenge the former president.

“My expectation is that will change and when it does I think we’ll have a robust conversation about hopefully the future of the country,” the South Dakota Republican said.

Thune last week told a panel of Bloomberg reporters and editors that his party is “evolving” and “in transition” but declined to endorse a specific person to run for president. He said that South Carolina Senator Tim Scott “offers a lot” and should be considered and that Florida Governor Ron DeSantis has shown he can be a prolific fundraiser. He also noted that other potential candidates, including Mike Pompeo, Mike Pence and Nikki Haley, have bases of support.

On Wednesday, Thune said Republicans need to rethink their strategy in states like Georgia with early voting. Trump has questioned the legitimacy of early voting and mail-in ballots, which became increasingly popular at the height of the COVID-19 pandemic.

“We’re really good at using resources to put messages on the air, but in the end it all comes down to turnout,” he said. “That’s something we’ve got to get better at.”

Other prominent Republicans have recently argued that the party is at a strategic disadvantage because its grassroots aren’t using early voting and vote-by-mail, including Republican National Committee chair Ronna McDaniel.

“Our voters need to vote early,” she told Fox News on Tuesday. “I have said this over and over again. There were many in 2020 saying, ‘Don’t vote by mail, don’t vote early.’ And we have to stop that and understand that if Democrats are getting ballots in for a month, we can’t expect to get it all done in one day.”

—With assistance from Ryan Teague Beckwith.