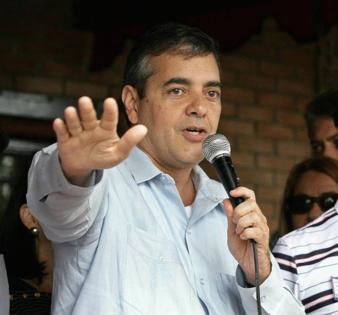 Rivera, a once-influential player in South Florida politics, and a few other defendants have been charged by an indictment returned in Miami but it has not yet been unsealed, according to the U.S. attorney’s office in South Florida.

Rivera had his first federal court appearance in Atlanta, where he had been living and was arrested Monday afternoon. But he is expected to be transferred to Miami this week to face charges, possibly including failing to register as a foreign agent in the U.S. for his work as a consultant for the Venezuelan government.

As Venezuela’s economy was crashing in 2017, the country’s state-owned oil company hired Rivera for a costly public relations campaign to improve the tarnished image of the Venezuelan firm in the United States.

In just a few months, Rivera’s consulting business collected $20 million from Venezuela’s U.S. subsidiary, PDV USA, but its contract with the former politician abruptly ended when he was accused of doing little work, according to a lawsuit in New York.

Court documents in the civil case revealed that Rivera diverted more than half of his PDV USA income — $13 million — to three subcontractors in Miami who supposedly provided “international strategic consulting services” for the Venezuelan firm.

One of Rivera’s subcontractors who received millions from his Venezuelan deal was a Miami real estate developer, Hugo Perera, who was convicted in one of South Florida’s biggest drug-trafficking cases, the Miami Herald and el Nuevo Herald have learned from court records and sources familiar with Perera’s history.

It was not clear from the court records whether Perera and other recipients of Rivera’s payments — including Miami-Dade political consultant Esther Nuhfer and Venezuelan businessman Raul Gorrin — ever did any work as part of Rivera’s consulting firm’s contract with PDV USA.

Venezuela’s U.S. subsidiary only became aware of Rivera’s diversion of payments after it sued his company, Interamerican Consulting, in 2020; it is now battling with Rivera and his firm’s lawyers over obtaining key evidence from the former politician.

PDV USA, based in New York and the parent company of Citgo, is seeking to recover the $20 million in payments from Rivera’s company in a breach-of-contract suit stemming from their original $50 million agreement signed in 2017.

Rivera’s firm has filed a counterclaim seeking full payment of the contract.

Rivera, who never registered as a foreign agent with the U.S. government to do consulting work for the Venezuelan firm, had been under scrutiny in the parallel criminal investigation by federal prosecutors in Miami, according to several sources familiar with the probe. But no one, including Rivera, had been charged in connection with his contract with PDV USA — until now.

Rivera, a one-term congressman and former Florida legislator whose career has been dogged by ethics and campaign-finance violation complaints, once tried to expel a Venezuelan consul in Miami. He is also a close friend of U.S. Sen. Marco Rubio, an arch critic of the Nicolas Maduro administration in Venezuela. Rivera and Rubio, both Republicans, shared a house in Tallahassee when they were both in the state Legislature.