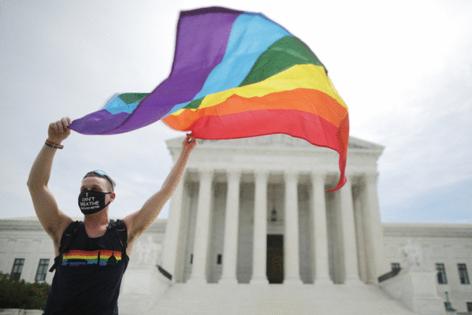 The justices heard arguments in a Colorado case that posed a conflict between a business owner’s First Amendment rights and a state anti-discrimination law that requires business to provide equal service to all, without regard to race, religion, gender or sexual orientation.

The court’s three liberals argued against giving a broad exemption to business owners who refuse to work with same-sex couples.

But the court’s conservatives questioned how the law can require people to write messages or promote causes they disagreed with.

In the case before the court, Lorie Smith, a website designer, said she would not work with same-sex couples because her Christian faith opposes such marriages.

Justices Neil M. Gorsuch and Brett M. Kavanaugh suggested that the court could rule narrowly, but uphold the principle that people in business cannot be forced to promote messages they oppose.

“She is willing to sell to everyone, but she won’t do a website that celebrates something that offends her religious beliefs,” Gorsuch said.

Kavanaugh suggested that only a small number of businesses could qualify for such an exemption. He said tailors, jewelers or caterers are probably not covered because their work is not purely expressive.

But the work of a website designer “involves speech,” he said, and therefore can be protected under the First Amendment.

Justice Amy Coney Barrett said she too agreed that the right to free speech would protect someone who is designing websites that celebrate weddings.