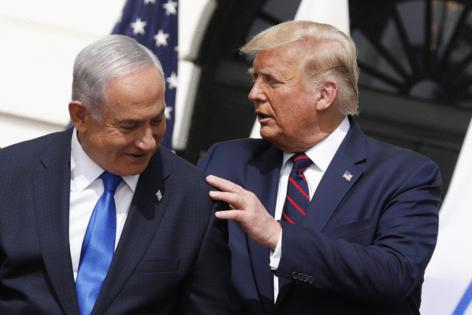 “I think it’s not merely unacceptable, I think it’s just wrong, and I hope he sees his way to staying out of it and condemning it,” Netanyahu said in an interview with NBC’s “Meet The Press.”

Trump has been condemned by Democrats, Jewish leaders and some Republicans over his decision to hold a dinner at his Mar-a-Lago residence two days before Thanksgiving with Fuentes and Ye, who has faced backlash for his antisemitic comments in recent months.

Trump subsequently said in a statement that Ye, formerly known as Kanye West, “expressed no anti-Semitism” at the dinner and that he didn’t know who Fuentes was at the time. Ye’s brief reinstatement to Twitter ended last week after he posted a swastika inside the Star of David.

Netanyahu’s Likud emerged as the biggest party in Israel’s election in November, putting him on track to lead a coalition government of right-wing, far-right and religious parties.

U.S. Secretary of State Antony Blinken said Sunday that the U.S. is “holding firm to the vision” of a two-state solution for Israel and the Palestinians, while “opposing acts that diminish the long-term prospects of achieving that goal.”

Normalization between Israel and its neighbors — a policy promoted by Trump’s administration — “is not a substitute for building peace between Israelis and Palestinians,” Blinken said in a speech to the J Street National Conference in Washington.

Netanyahu, 73, is poised to return as prime minister 18 months after losing office to an eight-party coalition of parties united by little except their opposition to his leadership while he faces bribery and fraud charges in court.

While Netanyahu praised Trump’s policies toward Israel as president, he declined to answer a question on whether he’d like to see Trump reelected. Trump announced last month his bid for reelection in 2024.

“Oh, God. I’ve had enough of my politics,” Netanyahu said. “You want me to get into your elections? Keep me out of it.”

(With assistance from Courtney McBride.)