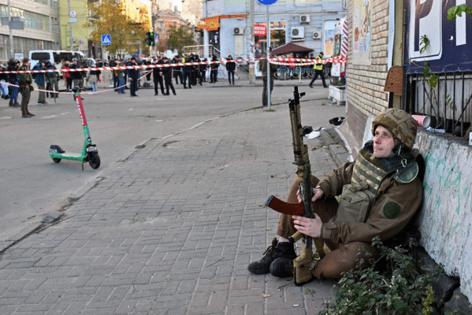 The U.S. will concentrate on Iranian weapons supplies to Russia and on supporting protesters in the country, rather than on stalled talks to revive an international nuclear deal, the Biden administration’s top Iran envoy said.

“Iran is not interested in a deal and we’re focused on other things,” U.S. Special Envoy for Iran Robert Malley said in an interview on Saturday. “Right now we can make a difference in trying to deter and disrupt the provision of weapons to Russia and trying to support the fundamental aspirations of the Iranian people.”

Iran is ramping up uranium enrichment activities and restricting international monitoring. It was censured at last month’s International Atomic Energy Agency meeting for stonewalling a probe into uranium particles detected a several undeclared sites. Iran is demanding an end to the IAEA investigation as part of any resumption of the nuclear deal, a condition that Malley and U.S. allies reject.

“What’s the point?” Malley said in Rome. “Why should we focus on it if Iran comes back with demands that are unacceptable? At this point we’re not going to focus on the nuclear deal because we can’t sort of keep going back and then being played.”

While contacts between European Union and Iranian officials are continuing and negotiations aren’t formally suspended, there have been no talks since the end of August, Malley said.

The U.S. now aims to “disrupt, delay, deter and sanction” weapon deliveries to Russia from Iran, he said. The provision of missiles or assistance in the construction of military production facilities in Russia “would be crossing new lines,” he said.

While the Kremlin denies using Iranian equipment, it has relied increasingly on drones from Iran as it burns through its own stockpiles in attacking Ukraine. Russian Security Council Secretary Nikolai Patrushev met with top Iranian leaders in Tehran last month.