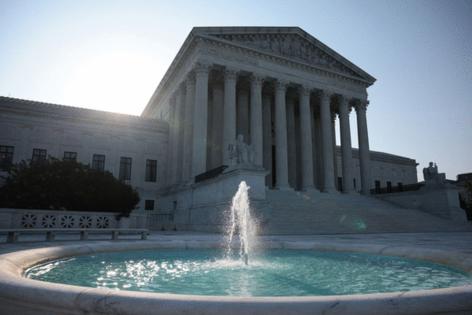 Lorie Smith is seeking to carve an exception out of a Colorado anti-discrimination law so she can create custom wedding sites — but only for opposite-sex couples. The court, which has swung to the right on social and religious issues with a 6-3 conservative majority, hears arguments in her case Monday.

“My faith has taught me that marriage is between one man and one woman, and I want to design and create websites that promote that message,” Smith, 38, said from her home in the Denver suburb of Littleton.

Civil-rights groups say a court opinion siding with Smith could put a massive hole in the nation’s anti-bias laws, potentially undercutting protections for racial minorities and women as well as LGBTQ people. Those advocates say the Supreme Court has repeatedly rejected claims that businesses have a First Amendment right to discriminate.

The case isn’t directly about religion, though it lurks in the background. In agreeing to hear Smith’s appeal, the justices restricted themselves to her arguments under the Constitution’s free-speech guarantee, declining to take up her religious-rights claims.

Smith’s challenge is a follow-up to a similar clash involving a Colorado baker who refused to make a cake to celebrate a same-sex wedding. The Supreme Court in 2018 sidestepped the core issues in that case, issuing a narrow ruling that said the Colorado Civil Rights Commission had shown hostility toward religion when it considered the baker’s case.

Both lawsuits were pressed by Alliance Defending Freedom, a Christian legal advocacy group that has emerged as the nation’s biggest courtroom force on behalf of religious rights. The group, which also helped draft and defend the Mississippi law that led to this year’s ruling eliminating constitutional abortion rights, says it has won 14 Supreme Court cases.

The case comes before a Supreme Court whose conservative majority has repeatedly bolstered religious freedom, siding in recent years with football coaches, parents and churches that claimed violations of their constitutional rights. In a July speech, conservative Justice Samuel Alito decried a “growing hostility to religion” in American society.

The argument coincides with a congressional push to protect same-sex marriage in the event the court reconsiders the 2015 ruling that enshrined it as a constitutional right. The Senate on Tuesday passed legislation requiring states to recognize marriage licenses issued in another jurisdiction, with religious-liberty protections included to meet Republican demands.